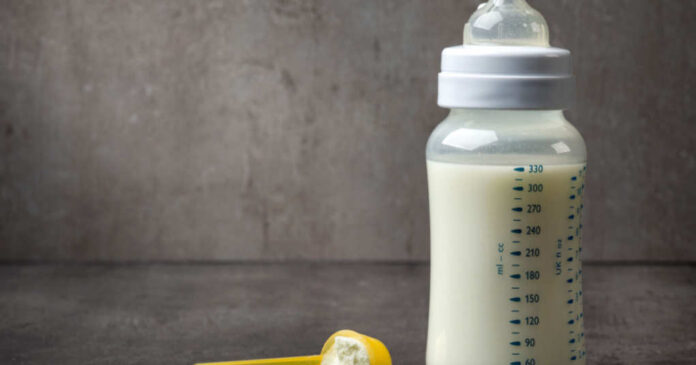 US Presidents are entrusted with the responsibility of researching every finite detail of every issue that crosses their desk. They’re hired to make important decisions on behalf of the citizens who elected them and they’re expected to make the right ones. Let’s talk baby formula.

While mothers with screaming babies were raising a ruckus over the liquid golds shortage, Joe Biden vowed through his clenched dentures to get to the bottom of the problem. Turns out he didn’t have far to look considering the problem was him. The reason for the shortage landing squarely in his own lap.

Once the source of the formula shortage was discovered, Biden had no choice but to shamefully admit how his quick, foolish, and thoughtless decision to shut down a major baby formula plant was the bullseye. He didn’t know it would have such an impact on the market because he’d never explored the ramifications that doing so would cause.

After a major recall of its product, Joe Biden ordered the closure of an Abbott baby formula plant in Michigan. He then instructed the FDA to recall other lot numbers of formula produced at the same plant as a just-in-case measure.

At a round table meeting held this week, baby formula manufacturers, with the exclusion of Abbott representatives who refused to attend, stared knives at Biden as they discussed ways to repair the old man’s blunder.

Prior to the meeting, Biden was pressed by reporters to answer why his administration had acted in such hast. “I don’t think anybody anticipated the impact of one facility – of the Abbott facility,” he admitted. “Once we learned of the extent of it and how broad it was, we kicked everything into gear,” he added with a lackluster fragment of gusto.

When Biden was asked how the manufacturers were all aware of the critical impact his decision would immediately inflict on the market but he was braindead on the matter, all he could say was, “They knew, but I didn’t.” Thanks for the keen insight…

National Economic Council Director Brian Deese, a Biden weenie, tried to fault Abbot for the crisis. He said they were too slow in agreeing with the demands of the government to get the plant reopened in a timely manner. With brazen audacity, they chose to allow their legal time to review the demands prior to blindly signing on the dotted line.

“It took too long for Abbott to agree to a consent decree, and once it was clear that that facility was not going to be able to come back online sooner, then it was clear we were going to have a more significant challenge,” he said.

“At that point, the President was informed, and he directed us to use all the available tools we had available to address them,” Deese added.

Biden, attempting to justify his foolish and unresearched decision, asked Rickett senior vice president Robert Cleveland if he was surprised by the Abbott closure having caused “this profound effect immediately.”

Without missing a beat Cleveland replied, “No, sir, we were aware of the general impact that this would have,” Cleveland responded. From the moment that that recall was announced we reached out immediately to retail partners like Target and Walmart to tell them this is what we think will happen.”

Biden was the last one to know when he should have been the first. That roundtable meeting should have taken place prior to the plant closure, but as usual, Biden wasn’t thinking straight. Competency has never been his forte.