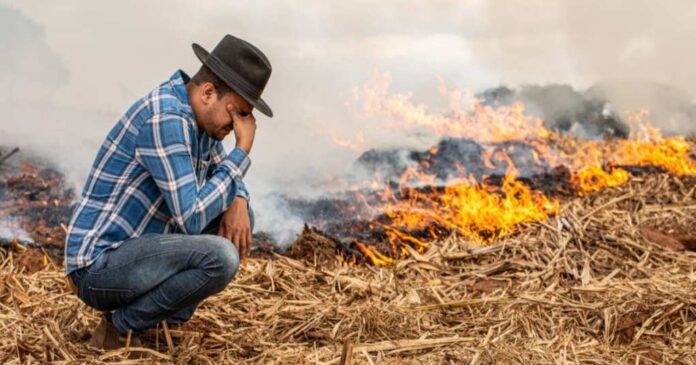 As you well know, there are some major issues with our supply chain right now. Store shelves are consistently empty, and certain products like baby formula, fertilizer, and several others are running scarce pretty much everywhere. On top of all that, inflation and these shortages have caused the prices of just about everything to rise rather dramatically in recent months.

To put it simply, consumers are growing increasingly nervous about putting food on their tables and making their money stretch from paycheck to paycheck. And it’s caused some of us to look a bit more closely at events that seem to be happening more and more often.

Take, for instance, the apparent increase in fires at farms and food production facilities.

If you didn’t know, there have been seven rather major fires at farms throughout the US in the past ten days.

On May 28, a fire on a farm in Laveen, Arizona, killed more than a hundred animals, chickens, sheep, goats, and even two dogs included, according to KNPX-TV.

On Friday, a barn in Lehigh County, Pennsylvania, caught fire, sending about 70 cows running for their lives. Fortunately, none were injured or killed. Saturday, a fire destroyed a luckily empty barn in Cedarville, New York. That same night an egg production facility caught fire in Wright County, Minnesota, sending tens of thousands of chickens to their death, according to WCCO-TV in Minneapolis.

Also, a horse farm near North Smithfield, Rhode Island, caught fire on that day. Thankfully, none of the 40 horses housed there were hurt. But just a few days before that, a horse ring at the same farm was destroyed by another fire.

And the most recent occurred on Monday, when a barn in Hanover Township, Ohio, burned down. Again, no one or animals were fortunately hurt, according to the Butler County Journal News.

Now, to be sure, none of these farms, aside from the chicken egg production one, causes any real sort of damage as far as production or supplies, or even loss of life.

But it still might cause one to wonder why so many fires seem to be occurring in such a short amount of time. Is it just a coincidence?

The answer is only made more interesting in light of recent warehouse and food supply fires that have occurred in recent weeks and months.

Then again, could it just be that we are only noticing these fires more because of those recent events? According to Healthline, it could be a simple case of the Baader-Meinhof phenomenon or “red car syndrome.”

It basically goes that if you decide to buy a red car, somehow you suddenly seem to notice red cars everywhere. There really aren’t any more red cars on the road than before. You are simply seeing them more.

So maybe just because we’ve been thinking about these recent fires, which could potentially affect our already strained supplies, we are noticing more of them.

And according to a report by “Facts Matter with Roman Balmakov,” it’s not like there have really been all that more or less food processing plant fires than in either 2020 or 2021. They have apparently just been covered by the media a bit more.

Another thing to note is that while we might want to assume some conspiracy is going on to make more sense of all this, there really aren’t any facts that support that theory.

There have been no reports of arson and no real consistencies in either the fire types, where they have been located, the types of farms, or what they affect. As we saw with the recent farm fires, one managed to kill thousands of egg-laying chickens, causing massive destruction. Meanwhile, another burned down a completely empty barn.

Neither was any sort of real production or food distribution affected. As Balmakov reported, other facilities were more than able to take up the slack for damaged plants, produce, etc.

And yet, for some reason, I still can’t push aside the idea that all of this might be connected somehow. How about you?