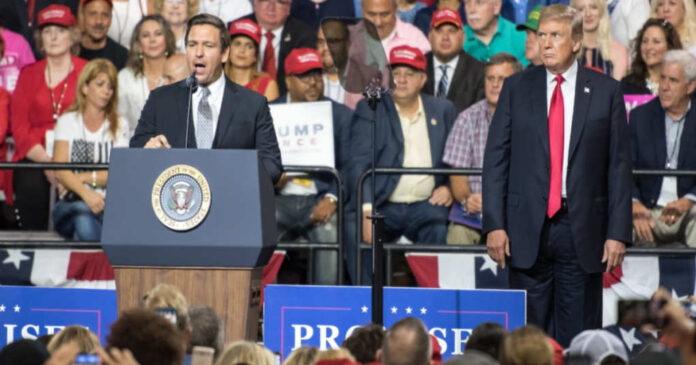 Florida Governor Ron DeSantis is no longer making a splash. He’s riding a tsunami of ardent admirers and supporters who think he’s too good for the Sunshine State not to share. DeSantis’s long reach extends out West where a recent straw poll has him topping Donald Trump in popularity.

Annually, the Western Conservative Summit conducts a straw poll to see which way the political winds are blowing. DeSantis edged out Trump by a 3% margin whileTed Cruz received only a complimentary nod.

Polls are polls and much of their outcomes have everything to do with who’s asked to share their opinion. The real test is coming up in the form of the rapidly approaching GOP primary elections.

This is where the rubber will hit the road in revealing how many of Trump’s loyalists have slipped from his grip straight into the highly conservative hands of the never outspoken Ron DeSantis.

Considering how DeSantis has toppled Trump in the poll for the second straight year is a good indication of the GOP storm that lies in wait. The summit was held in the Denver area where all 2,000 attendees got to anonymously have their say.

This isn’t the only poll that favors Florida’s governor. A recent poll conducted among campus Republicans at the University of Nevada, Reno has DeSantis over Trump by a score of 73-69. Other names on the poll were largely ignored.

Tyler Sanberg is a veteran Republican GOP operative living in Colorado. He made good sense when he pointed to a new generation of younger Republican voters contributing to the shifting tide.

“There is no real party standard-bearer at the moment, and DeSantis in many eyes is starting to define the post-Trump party. He fights more about policy and less on his Twitter account,” he said.

DeSantis gained lots of attention during the COVID-19 pandemic when he bucked the system by keeping Florida’s economy free-flowing while other states were fighting financial woes. He opted to let nature run its course by not boarding up the state.

DeSantis topping Trump twice in what’s billed as “the largest gathering of conservations in the Western United States,” means DeSantis is in it to win it. The man ain’t playin’.

Former chair of Colorado’s Republican Party, Dick Wadhams, didn’t bat an eyelash at the outcome of the poll. “It did not surprise me that DeSantis did well, but, yeah, it kind of surprised me that he did better than President Trump, again,” he said.

“I go to a lot of Republican events and have sensed for some time that even with Republicans DeSantis has quite an appeal because of his success as governor of Florida,” he added.

Trump’s spokesperson, Taylor Budowich, disagrees with the hoopla. He said his boss has maintained “unprecedented strength,” and no matter what a poll might reflect, Republicans want their Trump back.

Chairman of Montana’s Republican Party, Don Kaltschmidt, echoed Budowichs words by saying, “Montana remains Trump country, DeSantis is the No. 2 guy, but they love Trump here.” But he was also quick to add, “But there are people that hope Trump does not run. We want to make sure we have someone who can win. If Trump does not run, DeSantis is shoo-in here.”

At any rate, it appears as though the race is on between two allies and friends for the same job. Will they play nicely or rip one another to shreds? We’ll know that answer very shortly but you still have to admit, whichever one takes home the prize will still be a big win for America, and who can possibly have a problem with that?