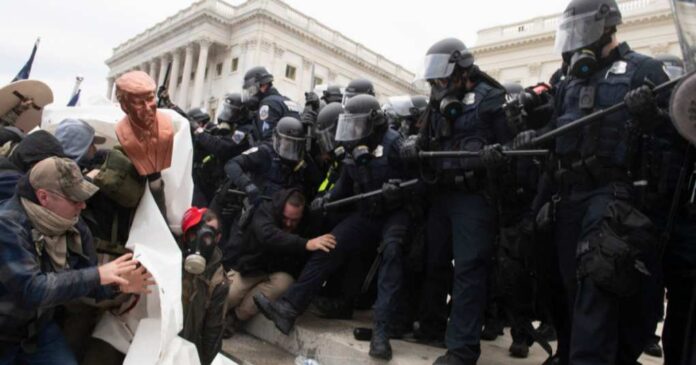 The Democratic Party has come to believe its lies regarding its popularity. The nastiness they employed during the 2020 election caused many of them to believe that the vast majority of the population favors them above the Republican Party. But recent events have revealed that most voters hate them, and one by one, they are being removed from office.

The liberals are scared that the midterm elections will strip away their power and hand it to the Republican Party. They have stopped believing they are the favored party and are now looking for ways to make it appear that they care about people.

The one issue they have kept around is the January 6 protests after Biden mysteriously won. The liberals took the protest and turned it into a fake insurrection. They claimed that the conservatives of America were trying to tear down democracy, an idea that could not be further from the truth.

The Democrats need to make it appear that the Republicans are trying to start another Civil War. They tell stories of how killers stormed the Capitol Building, trying to overthrow the current government. They tell how Donald Trump was the mastermind behind the entire event and how he continues to try to subvert democracy. All of their accusations are packed full of lies. Trump and the Republican Party have held the country together as the Democrats have tried to tear it apart.

The Democrats set up a committee that was supposed to investigate the January 6 gatherings. But as the Republican Party gave names to Nancy Pelosi for a seat on the committee, she rejected several names because they were known to get to the bottom of the truth. The committee would end up being lopsided and was staged to give a biased review of the January 6 events. And given how the liberals controlled the committee, it stands to reason that they will accuse Trump of horrible crimes.

Fox News reported just how biased the committee has become. They reported, “The committee has probed the role of the former President and those close to him in the months between election day, 2020, and January 6, 2021. Democrats — and the two GOPers who serve on the panel, Reps. Liz Cheney, R-Wy., and Adam Kinzinger, R-Ill. — hope the hearings will show just how much peril democracy faced that day.”

Fox News showed that the committee hoped that their investigation would show what they need to it to say for the liberals to appear to be the righteous ones. The liberals make it seem that America was facing another revolutionary moment. A few hundred people show up to protest, and they make it out to be another war.

The biased report from the committee lines up with the narrative they need to push to win votes. Nancy Pelosi and the rest of her crew have wasted a lot of time and resources producing a document that they will use to push an event that never took place.

The sad part about the day was how the Democrats behaved as peaceful people took a tour of their Capitol Building. Many people at the protests testified that the police were inviting them into the building. Many of them were escorted through the building and were allowed to exist without any trouble peacefully.

The committee has been tasked with finding a way to vilify former President Donald Trump. They know that he has a lot of power and influence in America because he worked for and cared for the country while serving as President. He did not try to terrorize or lie to the people, which is one reason why the Democrats had to cheat to win in 2020.