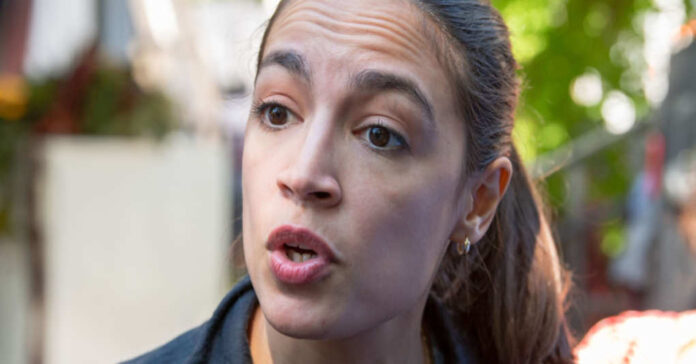 Alexandria Ocasio-Cortez is a Democratic Socialist – and she’s approved to admit that fact to anyone and everyone. During the 2020 presidential primaries, she was in support of her mentor, Bernie Sanders. After all, socialists looking to change the entire landscape of the United States have to stick together.

Once it was clear that Sanders was not going to win, AOC had no choice but to support Biden. Of course, she wasn’t a big fan of his – he was everything she didn’t want in a candidate. So, she and other liberals convinced people that Biden was the better choice over Trump simply by reminding them to vote within their party lines.

You remember their clever political slogan, don’t you? Vote blue, no matter who.

Apparently, it does matter who it is moving forward, though. AOC has become extremely vocal about what the 2024 presidential election should look like. And she’s not planning to support Joe Biden for a second term.

We’ve already seen how Biden has failed. He failed to deal with the withdrawal of Afghanistan properly, which led to the Taliban taking control. He failed to keep the border secure, which has led to tens of thousands of migrants entering the U.S. illegally. And we’ve seen how his policies that are anything but “America first” has damaged the economy.

When AOC recently appeared on CNN’s State of the Union, she was asked whether she would support Biden for the 2024 election.

“We’ll cross that bridge when we get to it.”

Well, that’s certainly not an endorsement. She went on to explain herself. “If the president has a vision and that’s something we’re all willing to entertain and examine when the time comes…we should endorse when we get to it. We’ll take a look at it.”

Essentially, she’s admitting that Joe Biden has no vision – and for that, we should all be more than a little worried.

Currently, AOC is focusing on how the Democrats can win the midterms. Considering that Democrats have been losing left and right in some of the local and runoff elections, they certainly have their work cut out for them.

The fact that AOC is not blindly supporting Biden for 2024 is proof that more and more people are worried that Biden has what it takes to lead the Democratic Party, let alone the entire country.

At 79, Biden has shown that he gets tired easily, gets confused easily, and can’t remember enough to get through a speech without everyone wincing with the words that are coming out of his mouth.

The New York Times, a typically left-leaning publication, even reported that “dozens of frustrated Democratic officials, members of Congress and voters” have shown their doubt that Biden has what it takes to turn the party around.

Even donors within the Democratic Party are looking at other options to support in 2024.

The Democrats will have to do something because the GOP is already considering potential candidates, even beyond a second run for Donald Trump.

Ron DeSantis has been identified as “America’s governor” because he takes the initiative to lead conservative efforts. At 43, he’s a younger candidate who could get the win not only the Republican primaries but the entire election. Others who are still much younger than Biden include Mike Pence, Nikki Haley, and Tim Scott.

Biden running in 2024 is not a guarantee – even if the old man says that he’s in it for a second term. He’s got one of the lowest approval ratings among presidents in recent history, so there’s a good chance he wouldn’t win against anyone.

Biden says that he’s the only one who could beat Donald Trump. Just because he did it once doesn’t mean he could do it again. Just look at Twitter – most people are ready to trade mean tweets for cheaper gas right about now.

AOC does believe that Biden is doing a good job so far, but the reality is that Biden isn’t going to be a good candidate for 2024. David Axelrod, a former chief strategist for former President Barack Obama said it best. “The presidency is a monstrously taxing job and the stark reality is the president would be closer to 90 than 80 at the end of a second term, and that would be a major issue.”