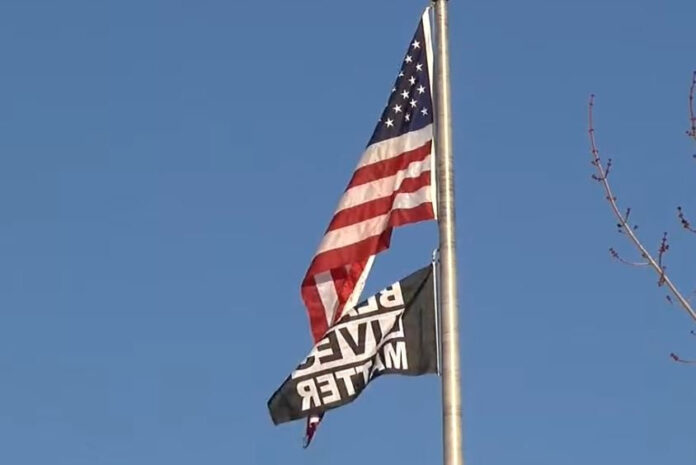 You may have heard the news already but displays of the Black Lives Matter flag have been approved by the US State Department. The flags can be flown this Tuesday, on the anniversary of George Floyd’s death in Minneapolis, Minnesota. Human Events’ Jack Posobiec is here to report:

“A source within the Biden State Department wishing to remain anonymous has shared with Human Events News a document that indicates that all U.S. “Diplomatic and Consular posts” are being encouraged to display shows of support for Black Lives Matter on Tuesday, May 25, the one-year anniversary of George Floyd’s death.

The memo reads in part, “The Department supports the use of the term ‘Black Lives Matter’ in messaging content, speeches, and other diplomatic engagements with foreign audiences to advance racial equity and access to justice on May 25 and beyond (italics added) We encourage posts to focus on the need to eliminate systemic racism and its continued impact.”

The entire letter is a great read, so be sure to head over to Human Events to find out more about what Posobiec has to say. The liberals will do whatever they can to silence him. He speaks the truth, though. “The memo, which is in part a woke statement on social justice, part an apology for U.S. actions, and part an endorsement of all BLM materials, expressly encourages the display of the BLM flag or banner at U.S. facilities (except on the actual flagpole that holds the American flag),” the letter continues.

Again, where is the lie here? Does anyone really think that the flags are being flown because the United States government cares so deeply? Of course they don’t. Biden could not give a you know what less about any of this, in the same way that Obama couldn’t be bothered either.

This is all political theater and they are merely preparing for the next election. When Trump tries to reclaim the presidency in 2024, they are going to point to these hollow charades as evidence that they are the ones who truly care. They’ll tell the world that Trump never would have flown these flags and that he cares about the rule of law more than the lives of human beings.

What they won’t tell you is that the rule of law is all that keeps many Americans safe on a daily basis. These laws need to be upheld before anyone else gets hurt. No one wants to reckon with this fact, except for our former president. Sadly, he has been silenced, during a time when we truly need him to be speaking out.

There are also those who are going to point out another obvious bit of hypocrisy here. The Americans who have been told that they are public enemy number one because of their Confederate flags have to be wondering why they were singled out when their government can fly any flag that they want. Since Confederate flags were essentially outlawed by the mainstream media, these people have no recourse.

Sure, you can still fly the flag if you want but guess what? You are risking being called a racist each and every step of the way. No one wants to hear your reasoning, they do not care if it is part of your personal heritage and they are going to call you every name in the book. Is it fair or reasonable behavior? No, it is not, but trust us….they don’t care at all.

Any legitimate concerns that are raised about the Black Lives Matter flags are going to be swept under the rug entirely because that’s life in these United States. The mainstream media is not going to touch on any of them. Perhaps that is for the best, though. We know what would happen if they did. Fingers would be pointed and everyone would be called a racist for not wanting to punish them over it. We’ll pass.