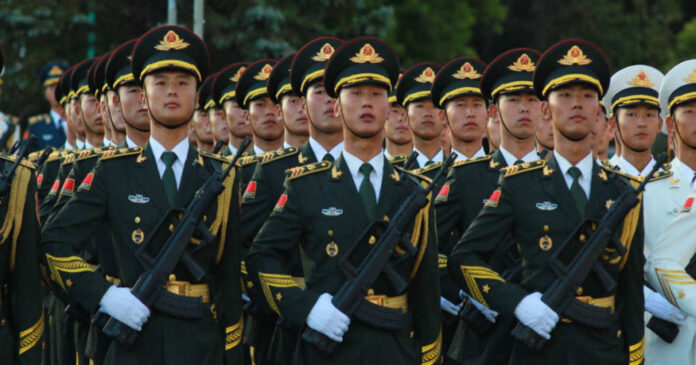 Ukrainian military forces have given the Russians a bigger run for their money than anyone could have ever anticipated, and hooray for them. This means one of two things. We either underestimated Ukraine’s determination and military might, or we grossly overestimated Russia’s.

The U.S. was no exception in thinking Ukraine didn’t stand a chance and that Russia would achieve its intended occupation within only days. But when the Russian army started bungling one move after another, including its five-mile-long convoy of tanks that easily got blown to kingdom come, it was a good indicator that they weren’t all Putin had made them out to be.

The not as obvious question in all of this is what about China? Its puffy-chested leaders strut like bantam roosters as they tow rockets down Main Street in festive military parades. They brag about China’s highly disciplined fighting forces who’d march through the gates of hell or wherever bad place they go, with a single command.

China goes through a lot of trouble to display its military might. Some might even think a little too much. In psychological circles, bragging is said to be done by people to cover their inadequacies. Could the same theory not hold true for the Chinese? Have they been pulling the silk over our eyes?

American spy agencies want to find out, but after missing the mark with Russia they’re trying to figure out new ways to accomplish the task. The Biden administration claims to be conducting a number of highly classified reviews on the matter, but lawmakers are now saying, “show us.” So far they’ve seen nothing.

Outside of only showing what it wants people to see, the Chinese government is hush-hush about what’s hiding behind the curtain. They prefer the element of surprise. It is known that they’ve been watching Russia so as not to repeat any of its many mistakes and this is cause for some alarm.

China hasn’t been under the watchful eyes of U.S. spies for some time now. Counterterrorism efforts have had them mostly peeking in on Arab nations, and through retirements and attrition, many of the agencies don’t have any Mandarin speakers left to send onto the playing field, and American intelligence networks previously working on the down-low in Bejing were all dismantled.

The other problem is in getting any American-based spy, regardless of their birth nationality, to volunteer for duty in China. In 2010 the Chinese government made an open statement about not wanting unwanted visitors by executing 10 American spies and the memory still lingers.

Especially with China setting its sites on little old Taiwan, reality means everything. It’s difficult to fight a war without first making sure you aren’t bringing a knife to a gunfight and might end up in a bind and needing to call for some help.

The first call Taiwan would make would be to Joe Biden who could conceivably be caught with his Depends down for not properly preparing for the inevitable which he in turn will inevitably act surprised by.

China’s been tossing out some large threats regarding Taiwan and the South Sea, but are they mimicking Putin? Are they a bully who’ll run from a good sock in the nose, or do they have three gazillion hardcore troops with high-tech weaponry preparing for world domination?

Your guess is as good as ours and Joe Bidens, but hang tight, the answer could be coming much sooner than later. Better hope it’s the one we want.