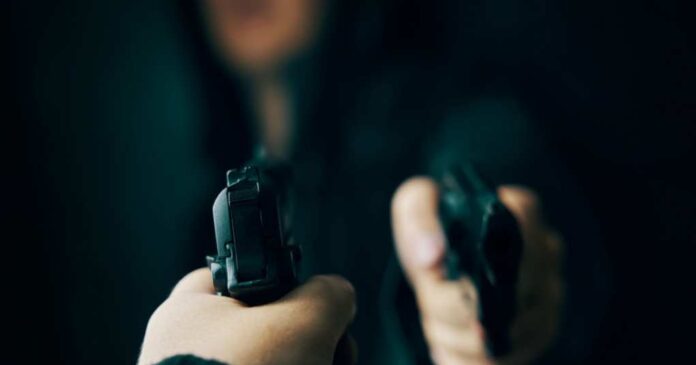 Law enforcement all over the country is under attack by people seeking to make some statement with the confrontation. And those located in Democratic-run states have it exceptionally bad because of the way the liberals are attacking officers every chance they can get. But now and then, a patriot steps up and warns those willing to sacrifice their lives to save others.

Justin William Flores was the killer that shot and killed two officers at a confrontation he started at a local motel in El Monte, California. Flores reportedly attacked his wife, who fled for her life and moved into a local motel. But the killer found her, and that is when everything took a turn for the worse.

Diana Flores was the woman that alerted the police to the danger awaiting them in the room. She mentioned that he was dangerous and had a gun. But police officers act unselfishly because they know they must get the suspect before he can harm any other person.

Diana Flores stated, “I am so deeply sorry, my deepest condolences for saving me, I’m so, so, so sorry. They didn’t deserve that, or their families. They really didn’t. They were trying to help me and I told them before they went into the room, ‘Don’t go in. He has a gun.’”

The two officers that gave their lives protecting life were Cpl. Michael Paredes and Officer Joseph Santana. In a twist of events, Governor Gavin Newsom stated that the flags should be flown at half-staff for the fallen. Newsom has never supported law enforcement in his state. He has tried to vilify them because he believes they are part of the problem.

The two heroes that gave their lives were exceptional people. One had been on the force for several decades, while the other was months into his journey. They both chose to serve, knowing their lives were in danger and that their state leaders did not support them.

Diana Flores had been abused by her deceased husband and wanted to get away from him. But upon his arrival at her motel room, she knew there would be trouble. She warned the police of the danger, but they still had a job to do.

The cop-killer had a history of violent behavior. He was on probation and had even served prison time for stealing a vehicle and burglary. He was not to have a firearm while he was on probation. He was even arrested for the possession of a firearm in 2020.

Newsbreak reported that the District Attorney’s office stated, “The sentence he received in the firearm case was consistent with case resolutions for this type of offense given his criminal history and the nature of the offense. At the time the court sentenced him, Mr. Flores did not have a documented history of violence.”

The Democratic-controlled state of California goes easy on the felons. Flores should have received several more years in prison for having a firearm. But instead, he was given two more years of probation. Criminals have it easy when the liberal leadership wants to punish the police and take sides with the criminals.

The Democrats are bound to make a political issue out of the shooting of the police officers. They were warned of the danger by the victim, but that would not stop them from doing their job. But the liberals need every opportunity to make a case for gun control, and this incident is right up their alley.

The officers moved into the motel room and confronted Flores, who attempted to run. But he was shot and killed once he stepped out of the room and into the parking lot. Flores was a man on a mission to kill people, and the police had to stop him at all costs. The two officers’ tragic killings are taking place in liberal-run states. People have no respect for law enforcement because, in the blue states, the police are being promoted as evil by state leaders.