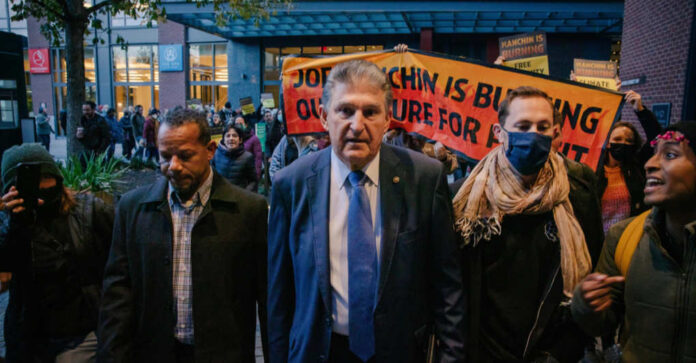 Joe Manchin is a Democrat that has constantly stood against the evil wiles of President Joe Biden. He has voted with Republicans are numerous bills that would have bankrupted the country if they had passed. He sees the persistent president trying to implement several things that would essentially change America into a country poisoned by socialism.

Joe Biden and his progressive fan club have longed and desired to see people pay for free healthcare for illegals and free higher education. But their efforts to pass such laws have been met with opposition. Biden even tried to hide such ideas in his past spending bills, but it was Joe Manchin that would ultimately be the deciding vote to keep the bill from becoming law.

But at the end of the day, Joe Manchin is still another Democrat with ideas that are not in the people’s best interest. He is proposing a new version of a spending bill that would have the goal of paying down the debt owed by the United States.

His idea seems logical, but the way he wants to do it is wrapped up in liberal ideas. He would love to let the medical giants negotiate drug prices, fossil fuels would be the heart of American energy needs, taxes would go up for the wealthy, and other items would be used to pay down the nation’s debt.

Joe Manchin has stated that “They know exactly where I am. I said, ‘Here, any amount of money we raise off of tax restructuring, half of it should go to debt reduction. Get your financial house in order. If you want to take care of inflation, then make serious about it by paying down debt.’” He is not trying to hide his ideas like Joe Biden has tried to do in the past. But raising taxes on the wealthy is a liberal notion that will not sit well with people that desire lower taxes.

Manchin’s bill is his attempt to solve the issue created by Joe Biden. He has included things that the Republicans can agree with, but he has also placed a liberal ideology of higher taxes within the bill.

The filibuster is the only thing keeping the Democrats from running away with the country. When the Republicans controlled the Senate, the Democrats loved the added security, knowing that to pass any bill, an extra number of votes were needed to keep a slim majority for overrunning the minority. But now that they control the Senate, they hate the filibuster.

The filibuster is the one thing that keeps the country from experiencing wild swings of changes when one party takes control of another. The Democrats believe that they should be allowed to do things that other people are not allowed. But the liberals believe that the Republicans should obey the filibuster and be allowed to ignore it while in control.

Newsbreak reported that “Hours after President Joe Biden laid out what he hoped to salvage from Democrats’ defunct ‘Build Back Better’ social spending plan, Joe Manchin quickly assembled a counteroffer. The plan that Manchin is bringing up is something that the liberals have seen before. It might amount to deja vu for Democrats, many of whom still feel burned from last year’s debacle, yet many in the party are willing to entertain any shot they have to unify while they still have control of Congress.”

The problem that the Democrats have with anything that is not of their design is that they do not want to discuss it. Manchin proved that point with his counteroffer of the dead Build Back Better nonsense Biden was trying to push. The leading Democrats refused to listen to any other idea and thereby rejected getting part of what they initially wanted in Biden’s failed attempt to pass bills.

Manchin has ideas that would give both parties something they want to see. But the problem is that the Democratic leaders will not accept anything less than a complete list of their demands included in any new agreement. They are a bunch of greedy thugs unwilling to even work with others in Washington.