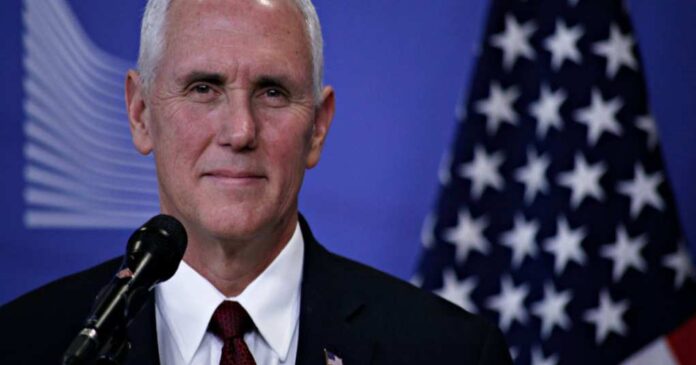 Mike Pence has emerged from the shadows with a newly found swagger in his step. Speaking at the University Club of Chicago Pence clenched his fist as he derided Joe Biden for “squandering” the significant gains that he and Donald Trump had amassed in their efforts to rebuild America’s economy. His reappearance at the pulpit could also indicate that the former V.P. is seeking the next office up from the one he previously held.

“The truth is, the American dream is slipping further and further out of reach every day for more families,” Pence said. “Our economy is not serving the American people the way they should.” Pence directly blamed “runaway inflation” on  Biden’s foolhardy economic policies.

Pence took pot shots at the cost of gasoline and the baby formula shortage as marked indicators of “a growing economic crisis that is unlike any other in our history.” He never once wavered from holding the Biden administration at gunpoint as he fired off one round at a time, never once losing his focused aim.

Pence wisely shied away from bringing up the Jan. 6 White House riot where he narrowly escaped a lynching. He’s hoping to dim the spotlight that had him profusely sweating by instead saying, “We have been through a lot over the past several years.”

Continuing, Pence cleverly segwayed his focus back to Biden. “A global pandemic, social unrest, a divisive election, a tragic day in our nation’s capital, and an administration seemingly every day driving our economy into the abyss of a social welfare state,” he said.

Pence’s 40-minute-long ramble may have penetrated the eardrums of the 350 attendees, but the courteousness of their polite applause indicated that his words weren’t thoroughly absorbed. He didn’t bring on the hoped-for thunder.

As long as he was in Chicago anyway, Pence traveled around Illinois with his hat out to raise campaign funds for other Republicans running for various offices at the state level.

Just prior to his speech Pence had come from a fundraiser for Republican candidate Esther Joy King who’s vying for the soon-to-be-vacant seat of the 17th Congressional District. The spot is currently held by Democratic Rep. Cheri Bustos who no longer wants the job and won’t seek reelection.

Pence’s agenda has him coming face to face with over 600 Republicans when he speaks in Peoria at a Lincoln Day dinner organized by the Tazewell County Republican Central Committee.

Pence will be sharing the headliner spot with GOP Rep. Darin LaHood who’s a big fan of his. LaHood labeled Pence as “a conservative champion.”

But if Pence’s reception at the upcoming event mimics the lackluster enthusiasm of the University Club crowd, he may want to consider shopping for a beach house in Tahiti. Without the solid backing of Illinois Republicans, his days are numbered.

Here’s a curious thought. Donald Trump may or may not run in 2024. He’s keeping his final decision under wraps until he can tell which way the wind is blowing. If he does, he’ll stampede the circuit like a bull in a china shop. But, what if he doesn’t? Who will he endorse?

All things considered, it’d be a tricky move for him to scrape Pence out from under the bus he was thrown under, so count on it not being his former golden boy.