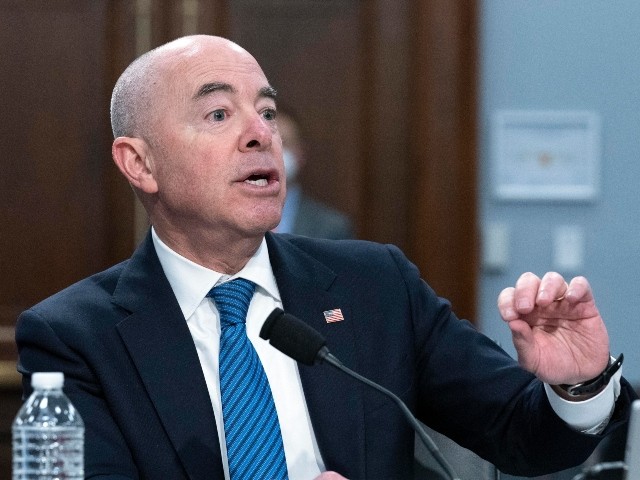 The cartels “cruelty is illustrated very powerfully in the tragedy that was just experienced yesterday in San Antonio where we have now, I think, 50 people are dying in the trailer of a truck that were seeking to enter the United States illegally,” border chief Alejandro Mayorkas said in a June 28 interview with Patrick Yoes, the president of the National Fraternal Order of Police.

But the migrants had already passed through the U.S. border, whose security is Mayorkas’ responsibility, as the Secretary of the Department of Homeland Security.

“There’s no question that the smugglers are often the ones most immediately responsible, and they really are the scum of the earth,” responded Mark Krikorian, the director of the Center for Immigration Studies, adding:

The administration shares the responsibility for these deaths because it is luring illegal migrants to take these kinds of potentially fatal risks.

Mayorkas undermined his claim of cartel responsibility by admitting that the hope of getting through the border is the attraction that pulls migrants on their dangerous journeys:

“The assumption behind his statement is that people will try to come because of how great we are, which is a refreshing statement from a Democrat,” said Krikorian, adding:

The Biden administration’s current policy is making these kinds of tragedies more likely by increasing the odds that [migrants] will be able to get what they want … Migrants aren’t stupid. People in Honduras, they get phone calls from their relatives who got across [Mayorkas’ border] because they brought a kid with them or were let go, and who now have a [job and an asylum] court date two years from now, and they say like, “Heck, I’m gonna go try.”

Mayorkas declined to mention his role in encouraging migrants to travel north.

Mayorkas claimed his agency is “attacking” the labor-smuggling cartels — even though he is also welcoming the many job-seeking migrants who paid fees to the cartels for the final leg of their journey to Mayorkas’ reception centers. He said:

But one thing that we’re doing also, is we are really attacking smuggling organizations in an unprecedented way. We are disrupting them in an approach that isn’t popular domestically anymore — remember the broken windows approach where, you know, traffic citation, whatever we can do to break up the bad guys, we’re going to do it? — well, that’s the approach we’re taking with the smuggling organizations.

If you’re going to pursue a broken windows policy in immigration, that means that illegal immigrants arrested for drunk driving get deported … [But] they are permitting mass violations of [immigration] law, which makes the services of smuggling cartels that much more attractive … They’re doing the exact opposite of broken windows policing.

Mayorkas does want to lower the death toll by setting up migration networks outside the cartels’ control, said Krikorian, adding:

until they can get Congress to do that, they are willing to see these kinds of tragedies because the alternative is stopping [migrant] people from coming in and they do not consider that a legitimate function of the Department of Homeland Security.

Amid the rising death toll, Mayorkas and his deputies “are maintaining cognitive balance by identifying the cartels as the issue,” Krikorian said. “I don’t think they can accept the fact that they are contributing to these tragedies.”

Mayorkas also acknowledged the cartels’ drug smuggling is driven by demand in the United States.

“No doubt, no doubt that you’re right. It is supply and demand, and that drives every market, including the illegal markets as well,” Yoes responded.

“It is partly an issue of demand for drugs,” said Krikorian. “But the fact is that poorly patrolled borders enable cartels to move more dope across the border more cheaply.”

Mayorkas did not note that demand from employers helps to create the supply of job-seeking illegal migrants. “If he were to identify the role of employers in illegal immigration, he’d have to acknowledge the importance of worksite enforcement, and this administration has pretty much stopped any worksite enforcement,” Krikorian said.

Mayorkas lamented the growing political divide in the United States, amid the expanding controversy over the growing number of migrants dying under Mayorkas’ watch:

The discourse, [the] conversations in this country, are more divided than I ever remember them to be. And I think we need to pause sometimes and just say, you know, whatever our differences are, we’re part of and we need to contribute to the greatest country in the world.

Mayorkas’ comment about discourse and division is “a thinly veiled way of blaming Republicans for these kinds of tragedies,” responded Krikorian. Mayorkas chooses to believe that because Republicans and the public “aren’t getting on board with the Democrats push for amnesty and unlimited immigration, so they’re responsible,” said Krikorian, adding:

He’s less bold about [blaming Americans] than say, the [Sen. Bob] Menendez [D-NJ] … and these other advocacy groups that are basically saying, you know, those who are opposed to opening the border as a reason these people are dead.

Fundamentally, progressives are loath to reject migrants at the border, despite the predictable death tolls, said Krikorian. Their logic is that “you gotta break a few eggs to make an omelet,” he added.

Throughout the interview, even after talking about the dead migrants, Mayorkas did not suggest that he would tighten security on the border.

Instead, he suggested that the poor countries south of the United States should welcome and keep more poor migrants in their poor, high-unemployment economies:

“We’ve got a toolbox of carrots and sticks,” Mayorkas said, adding:

These countries also understand, increasingly, that not everyone is just passing through. That quite a number of may settle — that their journey is dangerous [so] some may settle in their respective countries and so they’re invested in it as well. We had a great meeting with all of the countries in Los Angeles a couple of weeks ago, and everyone committed to addressing this in a united way, because it’s a united challenge and a real serious one.

Migrants are dying at sea, on highways, in deserts, rivers, jungles, and snow while Mayorkas repeatedly declares his support for migration into the United States.

The “core founding principle” of the United States is “equity,” and he is building an immigration system built on “equity,” Alejandro Mayorkas declared at an April 2022 meeting hosted by Al Sharpton’s National Action Network.

“We are building an immigration system that is designed to ensure due process, respect human dignity, and promote equity,” Mayorkas tweeted in August 2021, as he sketched out his plans for easy-asylum rules that would encourage a mass migration of poor job-seekers into Americans’ homeland.

“Justice is our priority,” Mayorkas declared at a November 2021 Senate hearing, adding, “That includes securing our border and providing relief to those [migrants] who qualify for it under our laws.”

Illegals can remain in the United States to compete for jobs and housing, as long as they do not commit violent crimes, Mayorkas said in January 2022. “Unlawful presence in the United States, alone, will not be a basis for immigration enforcement action … it is a matter of justice and equity as well,” he told the U.S. Conference of Mayors in Washington.

Mayorkas described his “identity” as a champion for migrants in his speech to the 2021 American Constitutional Society (ACS) national convention:

The element of dignity [and] the rule of law: Those are two foundational guideposts as I seek to lead an agency, as we, as servants of the law, seek to bring justice in whatever we do. And here in the Department of Homeland Security, I think that must guide everything that we do.

The extraction migration economic policy is hidden behind a wide variety of noble-sounding excuses and explanations. For example, progressives claim that the U.S. is a “Nation of Immigrants,” that Americans have a duty to accept foreign refugees, and that the state must renew itself by replacing populations.

But the colonialism-like economic strategy also kills many migrants, exploits poor people, and splits foreign families as it extracts human-resource wealth from the poor home countries. The migration policy also minimizes shareholder pressure on companies to build up complementary trade with poor countries.

The polls show deep and broad public opposition to labor migration and the inflow of temporary contract workers into jobs sought by young U.S. graduates.