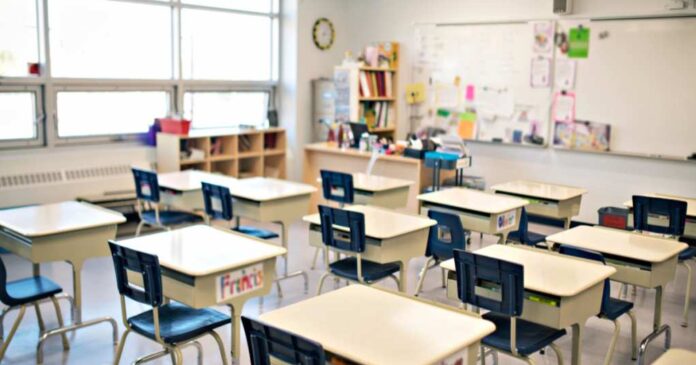 There’s been a disturbing number of school shootings over the past decade. And while it has finally led to some changes in legislation, it may do very little to keep children safe within their classrooms.

Legislation only helps those who are willing to follow the law. What about all of the criminals who are hell-bent on committing a crime? They will find a gun using any illegal means out there – and that means that schools still aren’t safe.

As a result, schools feel as though they have no choice. Across the country, billions are being spent on state-of-the-art technology that can be used to defend the school and provide alerts in the event of a school shooting.

The Cobb County School District in Marietta, Georgia is one that is making an impressive investment. They have spent $5 million on a crisis management service known as AlertPoint. This is a system being promoted that could help save the lives of students in the event of a school shooting.

A code red alert sounded, frightening students. It turned out the system went haywire. False alarms were sent to all of the schools in the district, triggering lockdowns.

The lights went into the classrooms. Students crouched along walls, out of sight of windows – and some kids were trying to dial 911.

As reported by Newsbreak, “Schools have been struggling with how to hinder, and handle, mass shootings since 1999.” It started with Columbine – and obviously, there’s never been a good solution since Uvalde just recently happened.

School leaders across the nation are terrified that they are going to be next.

The anxiety has led to a multibillion-dollar industry as school security products flood the market.

Some products focus on gun detection scanning while others offer wireless panic buttons.

Schools are investing in high-resolution cameras, software, and more. Students are getting their online activities monitored in some districts while other districts are focusing on what is being brought into the schools and into the classrooms.

It has been estimated that schools and colleges across the country spent close to $3 billion in security products and services in 2021 – up from $2.7 million spent in 2017.

Security trade groups have been lobbying for more money to be spent on the state and federal level for school safety. Unfortunately, not enough has been spent – and there’s still the question of whether the measures are enough to keep students safe.

Although Congress passed gun legislation last week, it only provided $300 million for school security. There are 98,000 public schools in the U.S. Quick math says that’s only about $3,000 per school – hardly enough to provide anyone with peace of mind that the school is secured enough against an armed madman.

There’s always the basic technology that every school needs – like doors that will lock automatically after they’ve been opened. In Uvalde, it was originally indicated that a teacher left the door open. That’s not accurate. What happened is that a teacher had the door propped open. When she saw the gunman, she closed the door, assuming that it would lock automatically behind her. It did not. As such, an unlocked door allowed the gunman to enter the school.

So, at the very least, schools need to know that every door leading into the school are locked. From there, security and technology directors talk about products that are vital. This includes crisis-alert technology and security camera systems.

More sophisticated systems can help to detect threats and will even use artificial intelligence.

The technology director at Stevens Point Area Public Schools District in Wisconsin, Brian Casey, wants to take a step back and ask questions. “There can be a tendency to grab the latest technology and make it appear that you are doing something really protective and very innovative.” He wants to look at the benefits and the cost before making a grab for anything.

There are also civil liberty experts that say too much technology can actually cause students to feel less safe.

There’s no set answer as of right now, but billions are being spent in a blind effort to make students feel safer and appease the concerned parents across the nation.