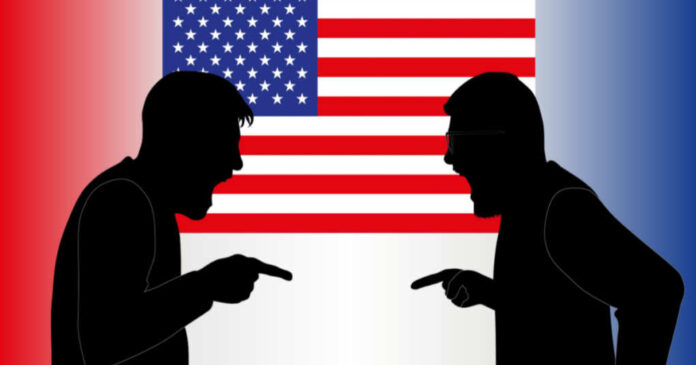 America has been as politically divided as any nation can become over the past several years of chaos and disruption. Sides have been chosen and social media is no longer any place for the weak of heart. Friends and family members have been disowned for their foolhardy ways of thinking as the crevice continues to widen. But the left and right are no longer just swinging their swords at each another. The Democrats are doing a fine job of spilling their own blood.

When certain members of a particular church denomination start disagreeing with their pastor, they take their faith elsewhere with a new pastor of the same denomination who caters more to their liking. The church splits.

The same holds true for political parties. A growing number of Democrats are sick of being led to the slaughter by the guy preaching from the presidential pulpit and they’re looking for a new space away from the ‘Biden can do no wrong’ members who are marching their souls into perdition.

The party split runs deep and wide. One side is still optimistic that Biden can pull off a Kumbaya moment that’ll have both major parties locking arms and belting out the Star-Spangled Banner. The other side wants to erect gallows to hang every red hat they see.

The issues within the party are diverse and complex. Half of them are yelling “hands off my body” while the other half learned in Sunday school that abortion is wrong. Some of them view racial equity as being horrifically outdated and unfair while others within the party are still trying to see the problem.

Some Democrats believe we’re getting a handle on climate change while others think we’re gonna die next week. Either way, while one half is rolling their eyes at the other half, the party continues to deteriorate at its own hands.

Ryan Grim published a study in The Intercept that revealed the turmoil among liberal advocacy groups that were once all on the same page. He said they’re having “meltdowns” that sometimes include “knock-down, drag-out fights between competing factions of their organizations, most often breaking down along staff-versus-management lines.”

Many times the conflicts involve how the racial and gender equity that’s being shouted to anyone who’ll listen isn’t being practiced within their own organizations. They also argue whether they should operate as individual factions or join forces as a coalition even though they don’t fully support each other’s agendas. If nothing else they could at least put on a good show.

Not mincing his words, Grim reported how, “The progressive advocacy space across the board has “effectively ceased to function,” while management and staff were “spending their time locked in virtual retreats, Slack wars, and healing sessions, grappling with tensions over hierarchy, patriarchy, race, gender, and power.”

From Grim’s perspective, internal drama is preventing these organizations from functioning. They’re so overwhelmed by the magnitude of current issues that it’s distracted them from their actual missions.

Grim also predicts that it’s this exact turmoil that’ll lead Republicans to victory in 2024, and possibly the reelection of Donald Trump. Oh well…