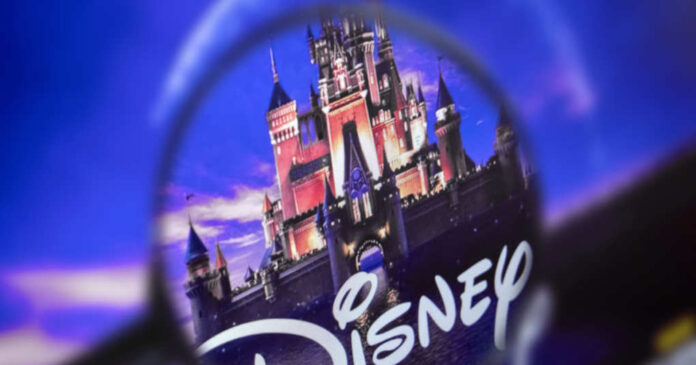 Disney used to be a magical place where kids could be kids. The TV shows included Mickey Mouse’s Clubhouse where kids could use their imagination. Theme parks brought the magic to life, allowing kids and adults alike to go on rides, meet characters, and have the time of their lives.

Now, Disney has chosen to go “woke,” and the brand has transformed.

Somewhere along the line, those values have disappeared.

Now, Pride Month takes over, splashing the colors of the rainbow all over the theme park. Drag queens and transgenders are showing up in more of TV shows and movies. And homosexual kisses are happening between central characters.

If the company is still Christian, they have fallen from grace.

Disney+ is proof that the company isn’t what it used to be.

There were certain things you just didn’t talk about because it wasn’t appropriate. You didn’t talk about periods and menstrual products on TV because you could be watching with mixed company. No girl wants to sit next to a boy while they talk about pads…whether it’s a friend or a father.

You talked about menstrual products with your parents, and only when you absolutely had to.

Disney has decided that everything is fair game.

Yet, their wokeness has gone to such new levels that they’ve even got a transgender character talking about menstrual products. What’s worse is that it’s an animated show. You know because cartoon characters have a right to menstruate, too.

Oh, Disney. You let the liberals change you…

“Baymax!” is one of the latest shows featured on Disney+. A robot, featured in “Big Hero 6” is getting recommendations on menstrual products. One recommendation comes from a character who looks like a man, but the shirt has the colors of the transgender flag.

The robot asks one person, “Excuse me, which of these products would you recommend?”

A woman responds about using tampons while another says they prefer pads. The apparent transgender character adds that they like the pads with wings.

What in the world is going on?

Why does this conversation have to take place? It can’t possibly be entertaining to kids.

As Janet Parshall, a talk radio host, tweeted, “Disney has devolved from being family-friendly to being outright evil…Parents beware.”

We’re going to have to agree with her.

Most of the wokeness that Disney is trying to thrust onto everyone doesn’t even make sense.

Their target audience is completely out of whack, but they refuse to change course. They’ll watch their profits continue to dissipate. Then, at some point, they’ll stop and wonder where they went wrong.

The show aired for the first time last Wednesday. Liberal media is already having a field day with the show because of how the transgender character shopping for menstrual products “sparks conservative outrage” as Chron recently wrote in its headlines.

It should spark outrage for everyone. If it isn’t, it’s time to seriously evaluate why shoving age-inappropriate content at children is so important. What is the liberal end game, anyway?