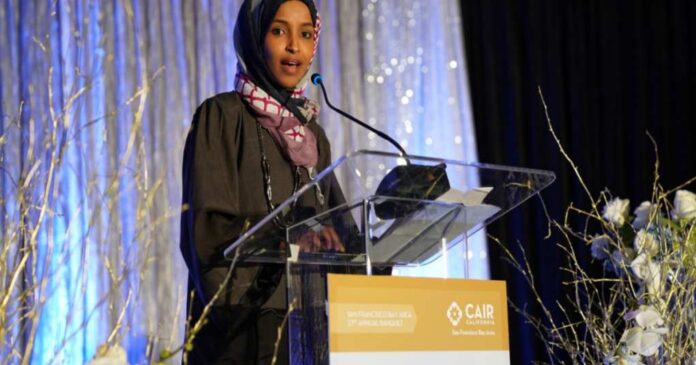 But like everything else the left has been saying of, oh, I don’t know, the last decade or so, there’s not much truth to that. For one, poll numbers show a rather large decline in Democratic voting registries, while that of the GOP has risen.

Another sign is when one of that party’s supposedly most-beloved individuals gets booed off the stage by her own community.

It happened on Saturday night in Minneapolis, Minnesota, at the Target Center.

Fans gathered in the sold-out venue to see Somali singer Suldaan Seeraar and were excited to do so. However, when leftist squad member Omar appeared on stage and began to speak, the crowds showed their lack of enthusiasm.

Well, that’s not entirely true. They were enthusiastic, alright, just not to have her be there or speak.

As she walked out on the stage, she began speaking, asking the crowd, “How’s everybody doing in Minneapolis?” But rather than giving out shouts of praise or excitement, Omar was literally met with boos and calls for her to “go home” and “get the f**k out of here.”

And it wasn’t just a few people here and there or just as she entered the stage. In fact, according to video footage of the event, it appeared the entire place went into an immediate uproar every time she tried to start speaking again. As one social media user commented, she was booed at one point for a whole ten minutes straight.

In a rare show of grace and poise, Omar continues smiling throughout the humiliating situation until she is eventually forced to leave the stage.

As you likely know, this is the home and stomping grounds of the un-American Ilhan Omar, whom I mentioned above.

It has also, in recent years, become a mecca for those like her who no longer wish to abide by the amendments of our Constitution, our standards of law enforcement, or even the fact that all men were created equally and should be treated as such.

I’m sure you’ll remember that this is where all those Black Lives Matter riots began in the summer of 2020, following the death of lifelong criminal George Floyd while in police custody.

Omar, using her hometown as a pedestal to gain more fame and fortune, used the tragedy to push her liberal agenda and get the police defunded. And other cities followed suit thanks to her boisterous efforts, making their streets even more dangerous and hopeless than ever before.

Now, some of those cities have since realized their mistakes and, as such, have “refunded” their police departments. Despite seeing crime skyrocket and countless minority communities suffer, as a result, Omar is still devout in her belief that there should be no police to keep our cities safe.

Of course, this isn’t really all that surprising when you consider what else she constantly stands for.

You know, like the countless times she has voted against ties to the US and our ally Israel. Or like how she referred to the 9/11 attack on the US as that time when “some people did something.” Of course, she didn’t even say they did something bad…

This is also the same woman who legally married her biological brother so that he could get US citizenship and go to school here.

No wonder her own people aren’t all that proud of her.

Unlike her, most Somali refugees are grateful to the nation that took them in and gave them a second chance at life. Most understand that while the US isn’t perfect, it’s better than the war-torn country they came from.

But here we have a woman who was given that same second chance, even with a job making more than most could only dream of. Yet all she seems to do is complain about how broken our country is…

No wonder those who might usually relate to her the best aren’t very proud of her.