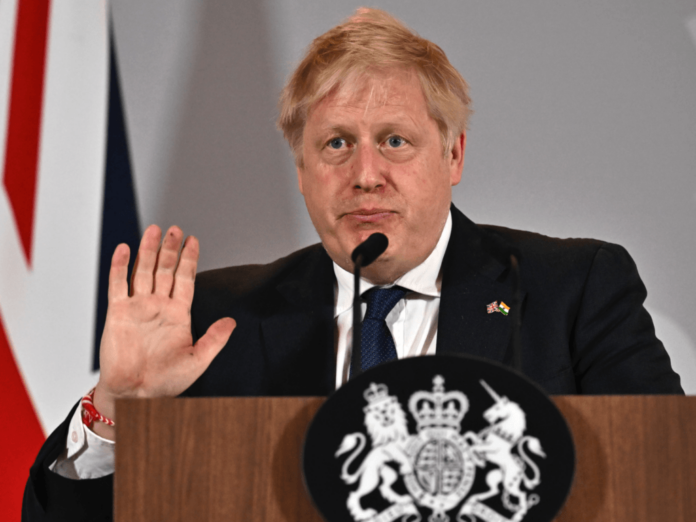 Despite desperate attempts to cling onto power, Mr Johnson was forced to resign after a record 59 government aids and cabinet ministers resigned following the sexual impropriety scandal involving the PM’s former deputy chief whip Christopher Pincher, whom Johnson had promoted to the role despite previously being informed of sex pest allegations made against the then-Tory MP. Yet in defiant fashion, Mr Johnson cast blame to the political system in London.

“As we have seen at Westminster, the herd instinct is powerful and when the herd moves, it moves. And my friends, in politics, no one is even remotely indispensable,” Johnson declared.

“I know that there will be many people who are relieved, and perhaps quite a few will be disappointed. And I want you to know how sad I am to be giving up the best job in the world. But them’s the breaks.”

Trying to strike a positive tone, Mr Johnson hailed the achievements of his government, including stewarding the United Kingdom out of the European Union — despite significant issues such as Northern Ireland remaining — and bringing the country out of the coronavirus lockdowns that he himself imposed on the country. He also highlighted his role as one of the most vociferous supporters of the Ukrainian war effort.

“I’m immensely proud of the achievements of this government, from getting Brexit done, to settling our relationship with the continent for over half a century. Reclaiming the power for this country to make its own laws in parliament. Getting us all through the Pandemic, delivering the fastest vaccine rollout in Europe, the fastest exit from lockdown. And in the last few months, leading the west in standing up to Putin’s aggression in Ukraine.”

“Let me say now to the people of Ukraine, that I know we in the UK will continue to back your fight for freedom for as long as it takes,” Johnson said.

“At the same time in this country, we’ve been pushing through a vast programme of investment in infrastructure, skills, technology. The biggest in a century. Because if I have one insight into human beings, it is that genius, talent, enthusiasm, imagination are evenly distributed throughout the population. But opportunity is not. And that is why we must keep levelling up, keep unleashing the potential of every part of the United Kingdom.”

The Prime Minister maintained his stance that it was a bad decision to launch a leadership contest amid the cost of living crisis and the war in Ukraine. Johnson went on to say that it was personally painful to leave without accomplishing all of his goals and after securing a historic majority without the opportunity to defend it at the ballot box.

However, he said that the “Darwinian” system will be successful in finding a suitable replacement as prime minister.

“I want to thank you, the British public for the immense privilege you have given me. “And I want you to know from now on until the new Prime Minister is in place, your interests will be served and the government of the country will be carrying on.”

While Mr Johnson stated that he intends on serving as a caretaker Prime Minister while the Conservative Party selects its new leader, a process which could take months, it remains to be seen if he will be afforded such a period, with the left-wing Labour Party threatening to launch a vote of confidence should he not leave office immediately.

The prime minister concluded with an optimistic vision of the future of the country, saying: “Being prime minister is an education in itself – I’ve travelled to every part of UK and I’ve found so many people possessed of such boundless British originality and so willing to tackle old problems in new ways.

“Even if things can sometimes seem dark now, our future together is golden.”