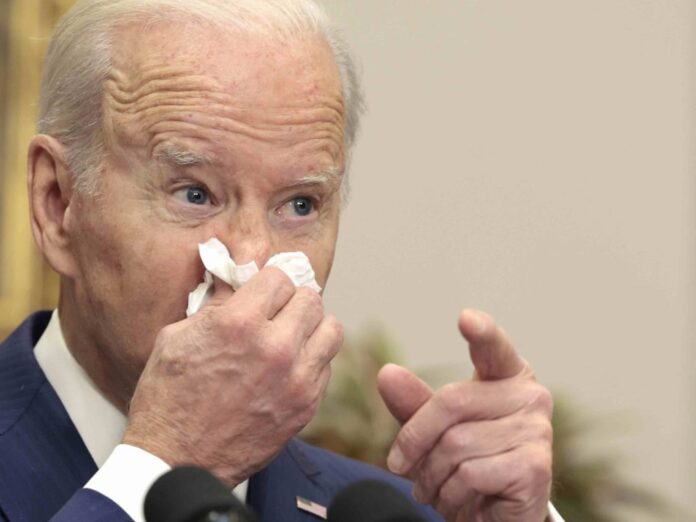 He did so the morning after Justice Brett Kavanaugh was forced by pro-abortion activists to leave a Washington, D.C., restaurant through the back door, just weeks after a radical gunman was arrested for attempting to assassinate Kavanaugh at his private home.

Though the White House condemned the assassination attempt, Biden himself was reluctant to deliver the message himself. And throughout the controversy over the Dobbs v. Jackson Women’s Health Organization case, the Biden administration has encouraged “peaceful” protests outside the homes of conservative Supreme Court justices, despite the fact that such protests are a violation of federal law. Press secretary Karine Jeanne-Pierre said Friday that protests outside restaurants were just fine.

Biden spoke Friday as he signed an executive order to stop a contrived parade of horribles that Democrats and establishment media outlets have conjured since Dobbs — that women would not be allowed to travel to blue states to obtain abortions; that hospitals would not be allowed to treat ectopic pregnancies; that couples could be arrested for in vitro fertilization; and even that state governments would punish women for the private data they may have stored in health apps on their smartphones.

The Biden administration has likewise hyped fears that the Supreme Court would soon come after contraception for married couples; that it would ban same-sex marriage; or that it would outlaw interracial marriages.

Biden repeated the false claim Friday that Justice Clarence Thomas had called for the Supreme Court to reconsider the right to contraception. He had done no such thing: he said that such rights should no longer depend on the “substantive due process” doctrine as a justification.

Thomas dislikes substantive due process because he fears that a Supreme Court with the power to imagine things in the Constitution could use that power for evil as well as for good.

Likewise with the tactics that Biden and the Democrats are supporting in their efforts to pressure, and to punish, the Dobbs majority. Would they tolerate armed protesters at the homes of liberal justices on the eve of a Second Amendment decision? Would they smear the Court if the vote had gone 5-4 the other way?

Worse, Biden is signaling to the most radical elements of his base that their tactics are justified. Though the White House — rarely Biden himself — rejects violence and intimidation, it allows its allies to march right up to that line.

A cynic might note that violence against Supreme Court Justices is a win-win for Biden: if the violence involves firearms, he can decry “gun violence”; and if, God forbid, an assassination attempt were to be successful, Biden would appoint a liberal replacement.

Biden once claimed that former President Donald Trump was a threat to the rule of law. But as conservative commentator Mark Levin noted, no president has ever undermined the legitimacy of the Supreme Court the way that Biden did on Friday.

It is one thing for pundits to describe Supreme Court Justices as political activists; it is quite another for the President of the United States to do so, especially with justices under active threat.

As events in Japan remind us, the danger is very real.