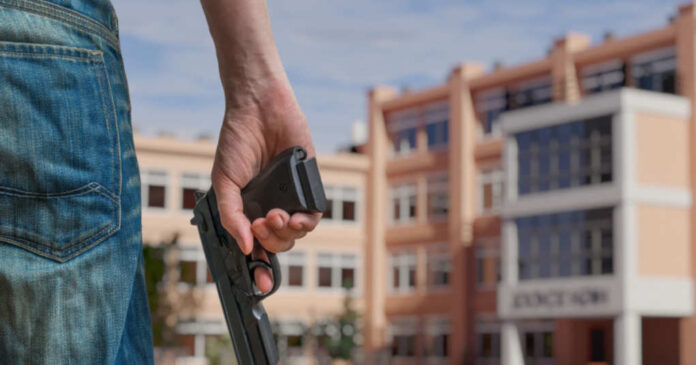 For decades now people have been told “See something, say something” when going on deployment, working in a sketchy neighborhood, or lately even in school. This kind of message was deeply embedded in a man from Richmond, Virginia. According to Richmond Police Chief, this “hero citizen” overheard a conversation between a duo about their plot for a mass shooting, and he told the police.

After receiving the tip, the police investigated a residence where firearms and ammunition were seized. Two men, Julio Alvardo-Dubon and Rolman Balacarcel have been charged as non-citizens in possession of a firearm as a result of the investigation. Both hailing from Guatemala neither is here legally. While Alvarado-Dubon is on an expired visa, there has been nothing released yet about how expired his visa is, if Balacarcel is here completely illegally as well or if he too is on expired papers.

In response to the announcement, Virginia Republican Governor Glen Younkin issued a tweet of congratulations. “I want to thank and applaud the hero in Virginia that stopped a potential massacre by alerting our brave Richmond Police Department Officers that work tirelessly every day to protect our communities. Its a great reminder that if you see something, say something to your local PD.”

Going ½ on mass shootings over the fourth of July sounds like a horrible statistic, but given the way these usually end up, this isn’t a bad thing. Honestly, it’s a job well done by those officers to get the right man and get him in jail nearly immediately. They did the right thing and got the potential shooters off the streets quickly.

In contrast, after the shootings north of Chicago, the Illinois Democrat Governor also issued a statement of his own on the 4th of July. “Our founders carried muskets, not assault weapons. And I don’t think a single one of them would’ve said that you have a Constitutional right to an assault weapon with a high-capacity magazine, or that that is more important than the right of the people who attended this parade today to live.”

This idea that this Governor has the foggiest clue as to what he’s talking about here is laughable at best. He hasn’t heard of things like cannons with grapeshot, revolving barrels, or triangle bayonets. Given documents, speech transcriptions, and historical accounts of their actions, the founding fathers would have loved to see where we have progressed with firearms. Likewise, they would also be ashamed of the mental health of people in this country, as well as their morality and values.

Capturing wood be shooters like this before they can act is absolutely vital to not only ensuring we continue to protect the second amendment in this country, but it also will help ensure the American people continue to stay thrive in their daily lives. By speaking up when he overheard something, this good citizen ensured he kept his fellow man safe from the illegal and illegitimate actions of others.

No matter how difficult it might be, sharing the information you have with the authorities and allowing them to decide what to do with it is the best way to go. Unlike the mob, these random shooters aren’t targeting a single person. Rather they are after mass groups of people. They care little to none about the lives of others and are looking to cause as much harm as possible. As they say, an ounce of prevention is worth a pound of cure.