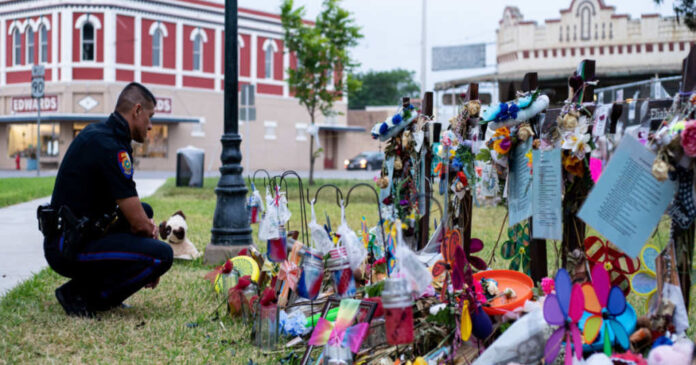 There’s a new report about the school shooting in Texas that will magnify the heartache in that broken community.

It has been revealed that one Uvalde Police officer could have taken a shot at the mass murderer before he entered the elementary school.

The officer asked for permission to shoot but did not get a go-ahead order from his supervisor.

This new report is the latest in a series of very controversial findings that are giving a clear picture of the massive mistakes that were made in the police response to the tragic mass shooting.

The report originated from Texas State University’s Advanced Law Enforcement Rapid Response Training program (ALERRT). It is a review of the response from the Uvalde Police Department. The assessment for this report was created using video surveillance from the school, a cell phone video, verbal testimony from the investigating officer, and Google Maps, per the report, which noted that the investigation is ongoing. ALERRT added that it drew the data from the most current information available as of June 30.

The shooter was Salvador Rolando Ramos, he murdered 19 students and two teachers at the Robb Elementary School on May 24.

Before entering the school, Ramos crashed a truck near the school and began shooting at windows. While this was happening, an officer with a rifle had Ramos in his sights.

“The officer, armed with a rifle, asked his supervisor for permission to shoot the suspect. However, the supervisor either did not hear or responded too late. The officer turned to get confirmation from his supervisor and when he turned back to address the suspect, he had entered the west hallway unabated,” the report stated.

The ALERRT report also referred to the Texas penal code that says officers can use deadly force if it is “immediately necessary to prevent the commission of murder.”

Therefore, the officer would have been allowed to fire on the suspect, but according to the report, he may have mistakenly thought that he needed authorization from a supervisor.

This was not the only failure found in the ALERRT report regarding the Uvalde police response. There was another missed opportunity to engage the gunman before he entered the building. The report said one of the first responding officers – a Uvalde Consolidated Independent School District Police officer – drove through the school’s parking lot “at a high rate of speed” and didn’t see the gunman, who was still in the parking lot.

The report also revealed that police officers “lost momentum” waiting for more firepower and equipment to arrive at the school. The report indicated that officers failed to consider other options to breach the room. They could have gone through the sheetrock or windows.

This may be the most intense part of the report, “While we do not have definitive information at this point, it is possible that some of the people who died during this event could have been saved.”

This report is very similar to another one that has been provided by Steve McCraw, the Director of the Texas Department of Public Safety. He gave a testimony to a Texas Senate committee on June 21.

McCraw found that “police led by on-scene commander Uvalde school district chief of police Pete Arredondo, could — and should — have confronted the shooter much sooner, which could have saved countless lives.”

Uvalde Police Chief Daniel Rodriguez and attorney George E. Hyde have not responded to requests from the mediaUvallde,  on this story.

The tragedy is just getting worse and worse for those who last so much.