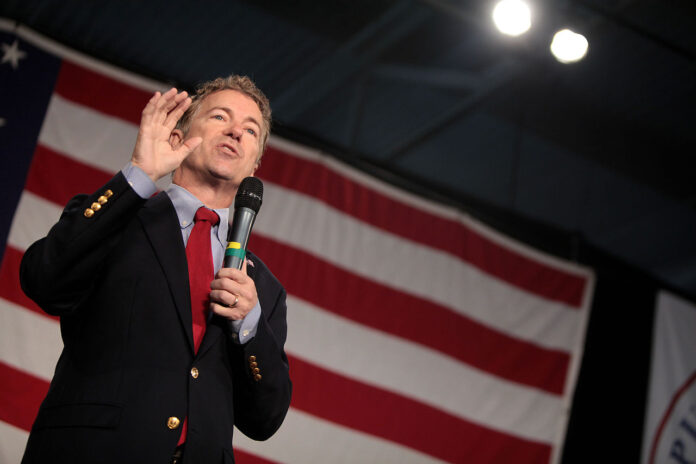 The Kentucky Republican Rand Paul is under attack again since he refuses to get vaccinated from a virus that he is already immune to. Paul came down with COVID-19 months ago and fully recovered. Science tells everyone that he is now immune from ever getting it again. But that is not good enough for the pushy Democrats that want to force him into an injection.

The Liberals left love power, and the vaccine gives them a reason to feel powerful. Paul is a doctor that knows full well how the body works at defending itself against viral infections. And once that happens, there is no need to get vaccinated.

But Rand Paul was asked if people should be urged to get the shot. And his answer is perfectly timed to drive the liberals crazy. He stated that “You know, I think medical decisions in a free society, each individual assumes their own risk, and the thing is, if someone chooses not to be vaccinated, and you are vaccinated, they’re not a risk to you, they’re taking a risk for themselves. So I think really medical decisions should be private.”

His belief is right in line with modern-day health information. It is illegal to reveal or even ask a person about their health records or to force them to show proof of anything. HIPPA laws keep the Democrats and private parties from meddling in a person’s private life. For a Democrat to insist on proof before sitting down at dinner is a violation of HIPPA law.

Paul went on to boldly state that “I already had it, I mean, should they force people to get vaccinated who had COVID and survived? They would first have to prove that the vaccine is better than being infected.” The problem is that they cannot prove that fact. They ignore the facts so they can invent rules and regulations to make life miserable for everyone else.

The right to choose is not up for the Democrats to decide. In a country where people live free, it is up to them to decide their health matters.

Rand Paul pushed the thought a little further when he would say that “Big Brother” might as well tell people what to and how to do it. Democratic rule is a fancy way of hiding dictatorship rule. It is nothing more than one person telling millions of people what they can go do with themselves.

Rand Paul gets into trouble when the liberals get ahold of the interview and publish it with edits. Paul stated that he would be open to changing his mind if evidence was provided showing it was needed so as not to be infected again. But the liberal media deliberately edited that portion out, so it made him appear to be defiant.

The media would publish that Paul is adamantly against the vaccination and that he would never get it himself. And the blah blah continues.

Fauci and the Democrats look for any truth that they can twist into a narrative to fit their agenda. And they would tell people that immunity is not enough. Fauci is a complete contradiction against reports coming from his own National Institute of Health.

One report from his office stated that “After people recover from infection with a virus, the immune system retains a memory of it. Immune cells and proteins that circulate in the body can recognize and kill the pathogen if it’s encountered again, protecting against disease and reducing illness severity.”

The real issue comes down to power and authority. The Democrats are all about big government. They want to tell people what to do and how they should do it. Their vision of America is a place where they say something, and the masses obey.

Senator Rand Paul is a proven authority in the medical world. When he tells people that their bodies are immune because it has fought off the virus, his word can be trusted. The party that cannot be trusted are the liberals led by Fauci and Biden, who in their world want to dictate the most basic decisions for all of humankind.