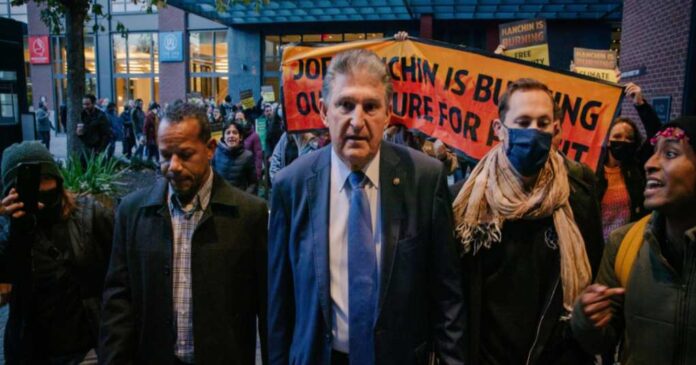 The midterm elections are causing a lot of people to reevaluate what matters in their political careers. Democrats have realized that pushing a socialist agenda is not the popular way to attract voters to their side. The entire party has had to reverse its plans and start making it look like they care about people instead of pushing an agenda. But the damage has already been done, and the voters are no longer falling for their lies.

The nation is sick and tired of being treated like an enemy. The sick liberals have declared war on freedom and used national issues to hide their agenda. They think that people want what they have to offer even though the popular vote dictates a different way of thinking.

But one Democrat has realized the truth and is finding that the people support candidates that subscribe to true American ideologies. Senator Joe Manchin has made it his mission to keep Joe Biden from instituting anti-American policies. He has found that the people he represents do not want what Biden offers. And his stance against those policies has earned him the respect and support of voters.

Manchin is a Democrat hated by his party. They cannot believe that one of their own is opposing the president’s push for climate change laws, higher taxes, free education, and a whole bunch of other socialist ideas.

Manchin has raised $1 million from people such as Ken Langone, the co-founder of the Home Depot, and Bob Kraft, who owns the New England Patriots. The blue Senator has met with Republican supporters and found that they were willing to throw their support behind people willing to fight against the terrorism flowing from the White House.

The Senator has told people that he will not vote in favor of Biden’s higher taxes until the inflation report comes out. Biden cannot stand his Moderate rival since his Build Back Better plan was reduced to ashes because of the socialism stacked within its pages.

The Home Depot billionaire has been a longtime supporter of the Republican Party. Newsbreak reports that he has donated $2.4 million to the conservative side in the past two years. And now that Manchin is joining forces with Republicans, he is willing to throw some support behind the Moderate Senator.

Langone stated, “Thank God for Joe Manchin. The guy has guts and courage and he did what he had to do, and continues to do what he has to do… He’s a Democrat, I’m a Republican. I’m gonna have one of the biggest fundraisers I’ve ever had for him.”

Langone is not the only one supporting Manchin’s bid for reelection. Newsbreak also reports that Home Depot’s CEO Edward Decker and others privately donate the maximum allowed by law to the Senator’s campaign.

Biden’s push for a socialist America has blown up in his face as voters flock to the Republican side. Americans are tired of being treated like second-class citizens by the Democratic Party. For the past 18 months, they have ignored the widespread consensus and sought to engage in anti-American ideologies.

Joe Manchin’s spokesperson Sam Runyon revealed, “Political headlines are of no value to the millions of Americans struggling to afford groceries and gas as inflation soars to 9.1%. Senator Manchin believes it’s time for leaders to put political agendas aside, reevaluate and adjust to the country’s economic realities to avoid taking steps that add fuel to the inflation fire.”

Joe Biden and the rest of the Democrats are unwilling to put aside their plan for the country’s sake. Their socialist agenda demands prices and inflation soar out of control because it will force the people to embrace a national government takeover to make life better for everyone.

The midterm elections will be a wake-up call for Biden and the rest of his supporters. He will be forced to sit as a lame duck president for the rest of his term while the rest of his party sits back and licks their wounds. Votes are ready to support those that want to focus on making America great again.