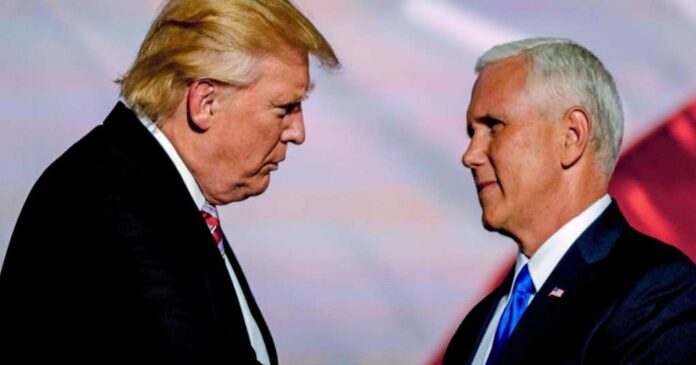 Mike Pence is coming for his former boss as the friendship they once touted turns into political rivalry. Trump and Pence are night and day with their Republican agendas so don’t look for a clean fight when they eventually go head to head, which they will. The two are already crossing paths as they head to Arizona for dueling rallies on the same day. Then the two will fly separately to D.C. where they’ll also be holding conflicting meetings at the same time.

The copycat movements are a further indication of the intensifying friction between the two as they individually woo some of the same political investors and allies into joining each’s respective teams.

Party strategist Scott Jennings gave his view of the situation. “I think this is a continuation of the larger message that Pence is trying to embody here, which is the Republican Party should look to the future. This is going to be the existential question for the Republican Party: Are we going to listen to a slightly different view than Donald Trump’s? Right now, the standard bearer for this is Mike Pence.”

Pence has done a complete 180 from the four years he spent in the White House shadows putting out fires and hanging as loyal as an overfed puppy to his master. The change may have come about from the still visible tread marks on his forehead from the bus he got tossed under on Jan. 6.

To very little avail, Pence has turned blue in the face explaining how it wasn’t within his authority to overturn the election results. Now shying away from the subject, his focus is on reshaping the party’s future. Into what no one is certain of yet, but he’s eyeballing a complete remodel.

Let the dual begin, and what better place than the battleground state of Arizona where Donald Trump recently endorsed Republican gubernatorial candidate, Kari Lake, a former newscaster. Wouldn’t you know it? Pence came along and endorsed her party rival vying for the same spot, Karrin Taylor Robson.

In a statement announcing his candidate of choice, Pence said, “As Arizona Democrats pursue the reckless Biden-Harris agenda, Karrin Taylor Robson is the only candidate for Governor that will keep Arizona’s border secure and streets safe, empower parents and create great schools, and promote conservative values.”

From all appearances, Pence is just a fly in the ointment to Trump and his trustworthy staff who refused to even comment on Mikey’s insignificant shenanigans.

The visit to D.C. will be Trump’s first time back in the not actually a city or state since begrudgingly vacating the White House. He’ll be headlining a two-day summit hosted by the America First Policy Institute.

Pence will be chewing the fat with the ultra-conservative Heritage Foundation prior to speaking at the annual National Conservative Student Conference hosted by the Young America Foundation.

Only because he served as Vice President, Pence continues to flaunt the wondrous accomplishments of the Trump administration that he had little to do with. But yet his message to the Republican Party is to simply move on.

We’ll be the first to let you know what we’re supposed to be moving on from, but if you find out first how about shooting us a line.