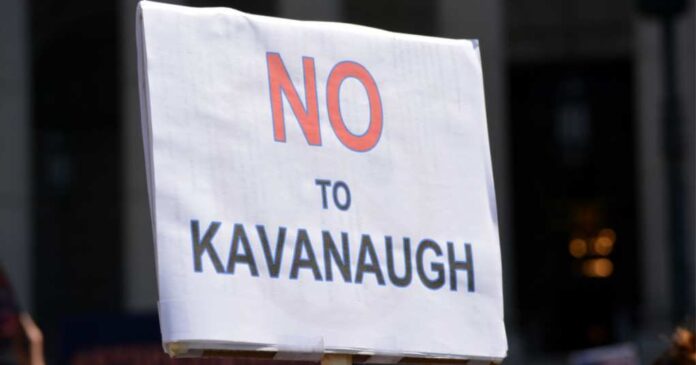 Brett Kavanaugh has been dealing with a lot. He is one of several Supreme Court justices who decided that it was important to overturn Roe v. Wade. There was no constitutional right to allow abortion and, therefore, it has gone back to the state level so that the people are more involved with such decisions.

He’s been harassed incessantly since the decision. He’s been targeted at restaurants, shopping centers, and even at his family home.

Now, his neighbors are being targeted by the protesters, too.

None of the protesting should be allowed. It’s illegal. Yet, that’s not stopping the far-left. And what’s worse is that they’re being encouraged by Democratic politicians like AOC and Ilhan Omar. And Biden’s silence on the issue isn’t exactly telling people that they need to knock it off.

Imagine being one of Kavanaugh’s neighbors right now. Protesters are lining the street, making it hard to get in and out of your driveway. And the chanting and screaming goes on for hours on end, day and night.

Neighbors are rightfully getting fed up as many of the pro-choice activists are blatantly ignoring the noise complaints.

Fox News Digital caught up with some of the neighbors last month, saying that the protesters are “loud and intimidating, threatening escalation if they don’t get what they want.” Drums and megaphones have even been used to abuse the neighbors and their children, dropping f-bombs left and right.

It’s been two months, and protesters are still at it. The Washington Post shared that tensions are on the rise and that “jarring language” is constantly being used.

Some neighbors have stepped in to try to put an end to the protests. That’s when they are quickly shut down by the liberal crowd. As one resident, Lyric Winik, told The Washington Post, “They just call us fascists. Nothing about this is healthy. We’ve got kids on this street scared to leave their homes.”

What the protesters are doing is illegal. While it’s okay to peacefully protest, it is not okay to do so to a federal judge. It’s a form of intimidation. And using language that scares children while ignoring all forms of noise ordinances isn’t exactly peaceful, either.

Winik also pointed out that things have gotten out of control and that what they are doing now is “hurting their own cause.” The protesters want to call the neighbors “Karens” because they are white women of privilege, yet the protesters are acting just as privileged by marching and chanting on the streets even after they’ve been told not to.

Kavanaugh has already dealt with attempts on his life. Last month, a man was arrested on charges of attempted murder after identifying his plans and showing up in the neighborhood with a knife, duct tape, and a Glock.

It’s only a matter of time before a neighbor takes matters into their own hands – or a protester decides to be a bit more blazon in their displays of “passion.”

All of this could have been avoided by shutting the protests down. The longer it continues, the bigger the problem becomes.

And now, with the arrests of AOC and others on the steps of the White House, it only encourages protesters to continue.

Only in Biden’s America…