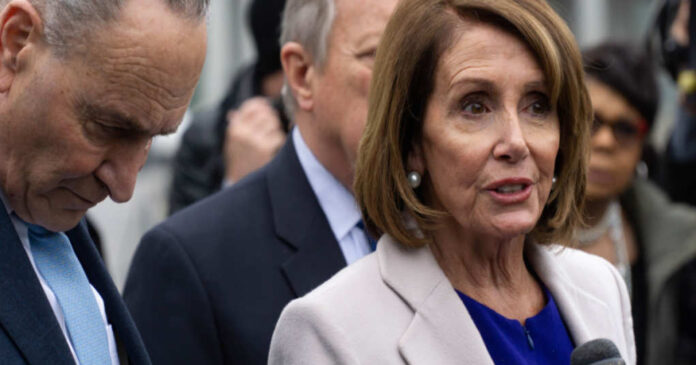 Propagandist Hu Xijin, former editor of the state-run Global Times and an outspoken mouthpiece for the most aggressive wing of the Chinese Communist Party, disparagingly quoted Republicans such as former Secretary of State Mike Pompeo urging Pelosi to make the trip and offering to accompany her. Chinese state media has been especially vicious against Pompeo, painting him as a has-been figure in U.S. politics trying to grab the spotlight by inserting himself into the Pelosi-Taiwan story.

“The Republicans certainly want Pelosi to do something that they did not dare to do when they were in office, and drag the whole Democrat-led government into the mess,” Hu goaded in a video editorial posted by the Global Times on Monday.

“As a result, the Biden administration would become the cannon fodder of the next Republican-led government, and the Democratic Party will suffer a major loss in the upcoming midterm elections,” Hu argued, in a somewhat amusing misreading of the American electorate and its priorities at the moment.

Hu said there would “definitely be a military crisis” if Pelosi goes ahead with her speculated visit to Taiwan next month.

“I believe the Chinese mainland [the legal territory of China excluding Taiwan, which is not part of China] will take every measure to undermine her visit,” he continued. “The mainland [China] will launch a no-fly zone over Taiwan, or even PLA aircraft will fly to the island along with her visit. Everything is possible.”

Hu has been very big on making this threat of a People’s Liberation Army (PLA) incursion into Taiwanese airspace over the past week, even hinting that PLA warplanes could try to force Pelosi’s plane down to “arrest” her. Any such behavior would obviously be taken as an act of war from the tyranny in Beijing.

“If Washington doesn’t stop Pelosi from visiting Taiwan, it has to prepare for a military conflict,” Hu said on Monday, ratcheting up his threats.

“[China’s] public has long been impatient with the island’s provocations to seek ‘Taiwan independence.’ Pelosi’s visit might accelerate a military showdown,” he concluded.

Taiwan is a sovereign country over which China has no real-world authority. China incorrectly claims the country as a rogue “province” and always refers to its statehood in scare quotes.

The Chinese government is not far behind Hu’s warmongering bloviations. On Monday, Chinese Foreign Ministry spokesman Zhao Lijian stopped just short of explicitly threatening a military response — but preemptively blamed the U.S. for any unpleasantness that might ensue.

“We are fully prepared for any eventuality. If the U.S. side insists on making the visit, the Chinese side will take firm and strong measures to safeguard our sovereignty and territorial integrity. The U.S. must assume full responsibility for any serious consequence arising thereof,” Zhao said.

Asked by a reporter if he was threatening a “military response” against Pelosi’s prospective trip to Taiwan, Zhao replied: “I’ve just made our position very clear. If the U.S. side insists on making the visit, the Chinese sidewill act strongly to resolutely respond to it and take countermeasures.”

Zhao added that reports of China delivering increasingly stern threats to the Biden administration over the past week are substantially “correct.”

On Tuesday, Zhao hinted that a “cooling” of U.S. rhetoric on “Taiwan-related issues” was a prerequisite for improving relations between Beijing and Washington, thus offering a bit of carrot for the Biden administration to go along with the stick of military threats.

Voice of America News (VOA) on Monday saw the stakes escalating for both sides over the rumored Pelosi visit, as the Biden administration’s well-earned reputation for weakness would be exacerbated by the spectacle of China dictating where high-ranking American officials are permitted to travel, while Beijing would look weak for allowing Pelosi to defy its threats and visit Taiwan.

Research fellow David Sacks of the Council on Foreign Relations (CFR) said Chinese dictator Xi Jinping “likely fears that Pelosi’s high-profile visit to Taiwan could cause him to look weak in the eyes of other Party members and appear as someone who does not have a firm handle on one of the most important issues for the Chinese leadership.”

“Facing significant economic headwinds and pushback to his zero-COVID policies and tough lockdowns at home, Xi will at the very least try to avoid another blow on Taiwan and could even find a crisis useful as a way to distract the public or rally public opinion,” he suggested.

“If China were to try to prevent Pelosi’s plane from landing, we would be in a full-blown Taiwan Strait crisis, which would be far more dangerous than previous crises given the political contexts in Washington and Beijing,” Sacks said, alluding to the three major crises in U.S.-Taiwan-China relations, the most recent of which occurred in the 1990s.

Professor Emeritus Arthur Ding of Taiwan’s National Chengchi University thought Beijing would come up short of the military reprisals or extreme provocations it has threatened, instead settling for some combination of diplomatic pushback and economic sanctions.

“I think China may (respond) in this regard, instead of suddenly raising this tension through the PLA fighter jets accompanying Pelosi’s aircraft, because that is tantamount to direct provocation by China to the United States,” Ding posited.

Fortune on Tuesday speculated China could exploit America’s dependence on Taiwanese manufacturers for computer chips, a vital industry the Chinese could hinder in various ways.

Some of the Republicans castigated by Hu Xijin for encouraging Pelosi to proceed with her visit are making the point that Biden simply cannot allow the United States to be seen as intimidated and controlled by Chinese threats, as noted by Taiwan News on Monday — especially since Russia’s invasion of Ukraine might lead Beijing to concluded that seizing territory by force is possible:

On July 22, Representatives Tom Tiffany and Scott Perry penned a letter to Pelosi calling on her to rebuke the objections of Beijing and President Biden and go ahead with her scheduled trip to Taiwan. They asserted that as the House Speaker she should “never have to ask a foreign dictatorship or the State Department for permission to talk to America’s friends and allies.”

They also urged her to schedule a vote for H. Con. Res 21, which calls for an end to the “One China” policy and normalizing U.S.-Taiwan relations. They pointed out that President Carter’s recognition of China was predicated on Beijing’s commitment to resolve its differences with Taiwan through peaceful means, but that China has instead continued to threaten to annex the country by force.

Representative Don Bacon on Sunday posted a tweet in which he wrote: “Communist China does not get to dictate who in America can visit Taiwan.” Less than 20 minutes later, Representative Brian Fitzpatrick posted a tweet in which he urged Pelosi to “show strength and not cower to the bullying of the Chinese Communist Party.” Fitzpatrick added that calling off the trip would demonstrate “further weakness on the world stage and play into the hands of the CCP.”

The Taiwanese government has so far been quietly agnostic on the subject of Pelosi’s planned visit, but on Monday the Financial Times quoted “several people involved in national security policy in Taiwan” who said Taipei feels “trapped” by the controversy, anxious about both Beijing’s possible reaction and Taiwan’s future if the U.S. backs down.

“If the visit is called off, that means China’s intimidation tactics work. That will have a chilling effect as others will shy away from engaging with us,” a senior Taiwanese official explained.

“If she decides not to come, it would raise suspicions whether China now has stronger power to influence American decisions,” agreed Alexander Huang, top representative to the United States from Taiwan’s opposition, China-friendly Kuomintang party.

“A lot of discussions are quite speculative and hypothetical. We haven’t had much info from the Biden administration,” another unnamed Taiwanese official said, confirming that President Joe Biden has not discussed the Pelosi visit with Taiwan, or clarified what he meant last Wednesday when he claimed the U.S. military “thinks it’s not a good idea right now.”