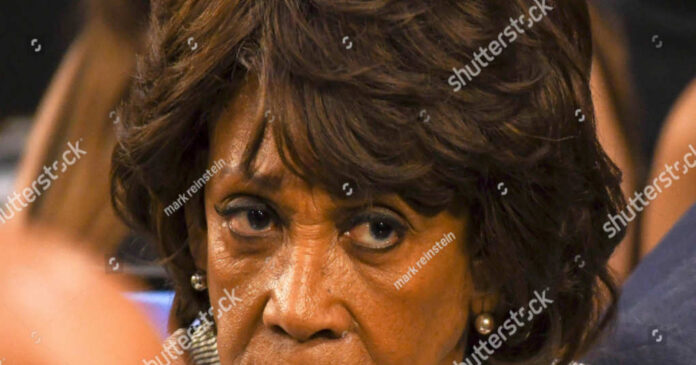 Maxine Waters is a known socialist hiding within the ranks of the Democratic Party. She cannot reveal herself as a staunch socialist because she would lose her position in Washington. So she hides her true beliefs under the banner of liberalism and secretly looks for ways to institute her destructive agenda into bills being passed around the House.

The socialist loves money, and she will stop at nothing to shell out as much as she can to family members to support her campaigns and career as a politician. Waters was found to have paid another $16,500 to her daughter. That new amount brings her twenty-year total to over $1.2 million.

Karen Waters is the recipient of the $1.2 million. Water’s daughter takes care of mailing slate-mailing operations geared to help get her mother elected to office. Karen Water’s business name is called Progressive Connections. A fitting name for a company designed to promote progressive ideologies through election campaigns of socialists hiding in Washington.

The California Democrat conveniently pays her daughter for so-called services rendered to her campaign. Fox Business revealed that “A Federal Election Commission filing Friday by Citizens for Waters shows that the younger Waters received four payments totaling $16,500 from the committee in June for ‘slate mailer management fees.’”

Maxine Waters knows that slate-mailing is a fancy way of hiding her unethical actions. All she needs to be able to do to pay her federal family funds is justify the work being performed. Slate-mailing is not a common practice in Washington. But it is done to tell voters how to cast their choice based on what a pamphlet dictates about other candidates.

Slate-mailing practice is so uncommon that Waters was the only one to use the method in the previous election cycle. The socialist could have used any company to advertise herself with, but she chose to use the service of a family member and pay them unheard-of amounts of money for their work.

Waters is a person that supports the killing of unborn children and other wicked ideologies. She is quick to point the finger at people who commit errors but unwilling to point her old finger at herself.

The progressive politician is one of a handful of politicians who actively pay family members for services rendered to them. According to the Los Angeles Times, waters was found to have paid over $1 million to several members of her family in 2004.

The arrogance and bold attitude of the old girl are sickening. She refuses to answer questions about the questionable practice and spouts that people should mind their business. Waters was said to have replied to questions that “We don’t have to answer your questions. We are not bad people.”

The fake belief Waters has about herself, and her family is self-imposed. She is unwilling to admit that her actions are highly questionable because she does not want to give up paying her family millions for questionable services. She is more concerned with padding her pockets than with having an appearance of honesty as a politician.

The practice of paying a family for services is not technically illegal. But those that engage in such practices are under a lot of scrutiny by the majority of people that refuse to go down that road.

Water’s pinheaded attitude about paying family members millions of dollars reinforces the belief that she is hiding something she does not want people to find out.

There is wisdom in avoiding the appearance of evil in a job that places a person in the public’s gaze. People want to know that their public servants are honest and represent them in the best way possible.

Waters has caught the attention of a whole lot of ethics experts that are watching what she does. They are waiting for her to reveal her true intentions so they can nail her for unethical behavior as a politician. As a socialist, the old girl has a lot of things that she must keep hidden to avoid being exposed as an anti-American influence in Washington.