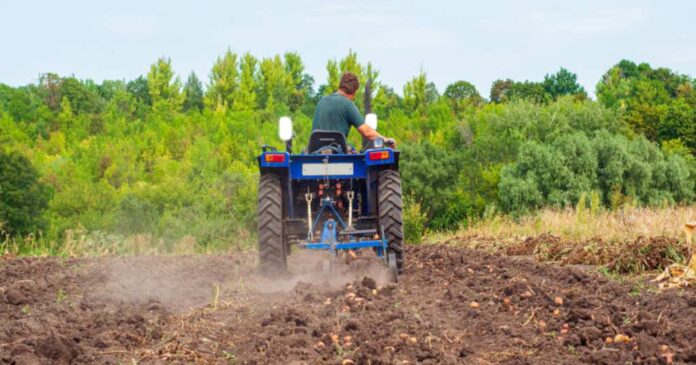 As usual, California is experiencing a drought. It’s nothing new. Nor is it new for many of the more Western states. The problem, at least for California, is that they are also experiencing a water supply shortage. Some have even started calling it a ‘crisis,’ as if we don’t already have enough of those…

And it is causing much of the state’s usually prosperous farmland to wither and turn to dust.

If you’ve even been to California’s Central Valley, you’ll recall that it is usually stuffed to the gills with row after luscious row of apples, oranges, grape vines, peach trees, almonds, and olives. So much grows there usually that this part of the state is known to supply about one-fourth of the United States’s total food production yearly.

But this year, farmers will be lucky to get about half of that.

According to Josue Medellin-Azuara, an associate professor at the University of California Merced who spoke to Bloomberg, “The size of fields intended for almonds, rice, wine grapes, and other crops left unworked could be around 800,000 acres, double the size of last year and the most in at least several decades.”

The outlet added that due to withered crops and dry ground, many farmers had been forced to rethink what, where, and when to grow or if they should continue to farm at all.

Of course, the problem isn’t the ground. It’s the lack of water.

However, as Bloomberg says, depleted water storage and low snowmelts from last year have them at an extreme disadvantage. The LA Times notes that Lake Shasta currently sits with only about 38 percent capacity at the moment, and Lake Mead and Lake Powell, have only 27 percent and 26 percent, respectively.

And this means that water supplies are now being drastically cut down and rationed to make water levels last longer.

Of course, there are things that the state likely could have done to help facilitate a healthy water supply but didn’t.

State Senator and Californian Republican candidate for governor Brian Dahle says it basically all comes down to poor water management. He notes that year after year, the state has received enough rain and snowfall to serve not only its 40 million residents but also its 4 million acres of farmland for years to come. However, instead of harnessing all that water and taking advantage of it, Dahle says Californian leaders have allowed “trillions of gallons of precipitation to run into the Pacific Ocean during the last two years” alone.

Additionally, Californians have voted to upgrade the state’s once prosperous and inspiring water infrastructure several times since 1996. And yet, every year, new environmental impact studies and other regulations block any real movement.

The state also recently shut down a project that would have built a new desalination plant on the coast, transforming millions of gallons of ocean water a day into a clean and drinkable water source.

I know, none of it really makes much sense…

Even if just a few of those projects had been completed, the state would be in much better shape at the moment.

And that is exactly why those like Dahle are calling for a change in leadership. Perhaps with Democrats out of the way, the state can restore its water supplies and once again become the pride of farming and food production in the United States. However, situations are only likely to worsen without that change, as they have for the last 40 years.

That, coupled with draughts in other states, is wreaking havoc on an already stressed supply chain and national food supplies.

And yet Democrats are still more worried about getting their abortion rights back… No wonder a red wave is expected come November.