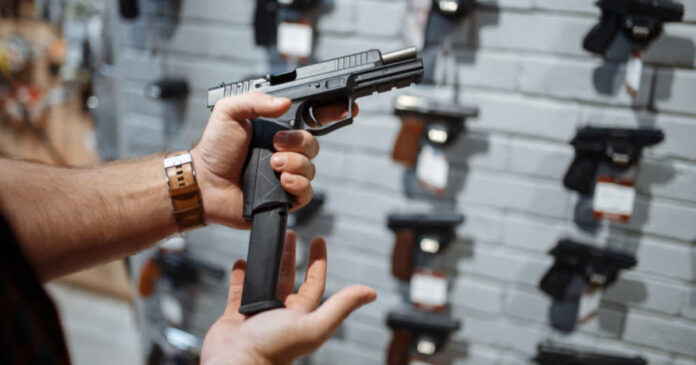 The recent mass shootings gave the Democrats the cover they needed to push stricter gun control laws. Ultimately, their end game is to remove the Second Amendment so the general population cannot own guns. They understand that if the people cannot defend themselves, they will be able to take control of the country without fighting for it.

The devious liberals pushed through a bill with some Republican support called the Safer Communities Act. The bill allows for increased penalties for illegally owning a gun. Those with a felony on their record would face a new charge which could put them in prison for up to 15 years.

Reasons reported, “Those provisions affect millions of ‘prohibited persons’ with no history of violence, including cannabis consumers, former psychiatric patients, and people convicted of drug crimes or other nonviolent felonies.”

The bill allows anyone with a crime on their record to be charged with being a gun smuggler. And it allows the liberals the right to define which people are disqualified. Any person with any felony would be disqualified from owning a gun. The Democrats may not be able to ban law-abiding people from owning a gun, but they certainly can try and scare them from trying to buy one.

Reason also pointed out that there are times when state law will trump federal law. They reported that “Maryland, for example, prohibits handgun possession by people convicted of violent misdemeanors, such as simple assault, that are not disqualifying under federal law. Violating that rule is a felony with a minimum sentence of five years in prison. That means someone with a disqualifying misdemeanor record who obtains a handgun in Maryland could also be guilty of “trafficking in firearms” under the Bipartisan Safer Communities Act, even if he was not a prohibited person under federal law.”

Commonsense would question such a law because it sounds like it would be charging the person twice for the same violation. But when the matter was brought up before the Supreme Court, it was decided that it was not a violation of the Fifth Amendment. The state and the federal government can charge a person for the same crime. And they could receive separate sentencings based on the trials.

The Democrats are devious and constantly look for ways to make life miserable for people. They are also a group of people that contradict themselves frequently. The hypocrites claim that felons have rights and should be able to do things that people without a police record can do. But at the same time, they secretly passed a bill that allows the felon to be charged with additional crimes for owning a weapon.

The only exception to the rule that is allowed by the Supreme Court is when a person is charged, and they do not understand that they or are a person prohibited from owning a gun. The felon can claim they did not understand the law and avoid additional charges.

The conditions that the Democrats were trying to create were a place where the broad language of the bill could trap law-abiding people. A simple misunderstanding could potentially lock a person away for 15 years of their life. And there is not a Democrat around that would come to their defense.

State laws are vastly different from one another. One state may allow a person to carry a gun without a permit, but another may require a pile of paperwork to be filled out. But the new bill adds to the confusion by allowing anyone who buys a gun, unknowing of their status, to be charged with gun trafficking. And that is just the type of environment the Democrats want to have around to scare people from owning a gun.