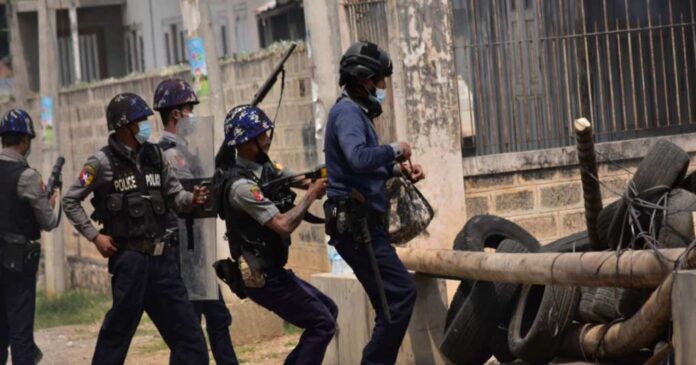 Myanmar rarely gets the press that other nations get because they don’t supply the rest of the world with needed assets. But the nation continues to be one of the most criminal military regimes the world has ever seen.

Myanmar’s regime announced this week that it had executed four pro-democracy activists, this was the first announced execution in the nation for more than three decades. The move was seen as an attempt by the military junta to instill fear in any resistance movements.

The four activists executed were sentenced to death during a closed-door trial in a military court. There were no attorneys present for the defendants. Their death was done in secret and the rationale was because of “brutal and inhumane terror acts.” The defenders of those killed said these charges were unfounded.

This brutal killing is a rebuke to Western influence and the United Nations. There has been a concerted effort to persuade the junta to free all of the political prisoners and stop the violence throughout the nation.

The military leaders of the nation have called other national leaders “reckless and interfering.” The United Nations Security Council has been unable to impose sanctions because of the resistance from China and Russia, two of Myanmar’s allies.

Representatives from the U.N. challenged the leaders of Myanmar not to proceed with the executions.

“These death sentences, handed down by an illegitimate court of an illegitimate junta, are a vile attempt at instilling fear among the people of Myanmar. They do not value human lives and they show that they do not respect the international community,” said Kyaw Zaw, a spokesman for the National Unity Government.

This is a shadow government to the junta led by ousted leaders after the military coup that happened last year.

Saw said the executions were an “affront” to international efforts by U.N. officials and the Association of Southeast Asian Nations, or ASEAN.

“ASEAN leaders should see the true position of the military by now,” Kyaw Zaw said. “Killing the activists is outrageous and a sad day for the country.”

One of the four executed was popular activist Kyaw Min Yu. He is better known as Ko Jimmy. Another of those killed was a former hip-hop artist who had been elected to parliament, Phyo Zeya Thaw. The other two activists executed were Hla Myo Aung and Aung Thura Zaw.

The four men were executed by hanging at a notorious prison just outside of Yangon.

The military junta that seized power last year had ruled the country for almost 50 years prior. They faced massive protests and a growing armed rebellion. But they are successfully crushing any dissent by arresting opposition leaders and shooting armed protesters. They have also bombed resistance encampments and burned thousands of homes.

They haven’t completely killed the movement, resistance forces along with armed ethnic groups have claimed control of almost half the country’s territory.

There are 12,000 political prisoners in Myanmar, none more well-known that ousted civilian leader Aung San Suu Kyi, 77. She won a Nobel Peace Prize but is serving an 11-year prison sentence and she faces 13 more counts against her that could carry a sentence of 180 years.

Just last month she was moved from house arrest and placed in Naypyitaw Prison, where she is being tried in a prison courtroom.

Thomas Andrews is the U.N. special rapporteur on human rights in Myanmar. He said, “My heart goes out to their families, friends and loved ones and indeed all the people in Myanmar who are victims of the junta’s escalating atrocities,” Andrews said. “These depraved acts must be a turning point for the international community.”

Khin Win May is the mother of Phyo Zeya Thaw who was executed. She said, “I didn’t think my son would be killed so quickly. As a mother, I am proud of my son for giving his life. If possible, I would like to take the ashes and create a monument to the martyrs.”