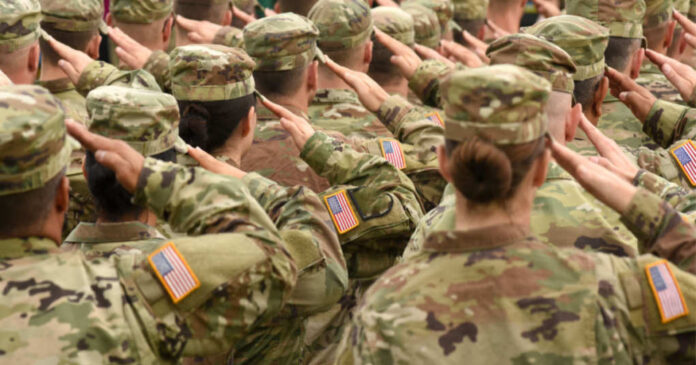 Failure to meet recruiting and retention goals are not uncommon. Especially when the country is just getting done with a 20-year war. When they fail to make the grade, and now drop below the post-Vietnam War level though, it’s gotten worse.

Now in response, leaders from each branch are reaching out to ask why the failure. What is going wrong, and how to fix it. In turn, elected officials are scrambling to get their committees heard on the subject, and to try and get things fixed at nearly all costs. As it sits though, it’s not all failure.

The Army has reached 66 percent of its goal for the fiscal year ending in September, and the Navy is at 89 percent, according to data compiled from October 2021 to May 2022. Even with rates of 100 percent for the Marine Corps, Air Force, and Space Force, that leaves the department with a total rate of just 85 percent.

Granted an old serviceman’s joke that only the Army and Navy are really in the Military. The Marine Corps is a cult, the Air Force is a corporation, and the Coast Guard/Space Force doesn’t count anyways. So, when these two branches that are the “actual” military are failing to hit recruiting numbers, it’s a bad sign of things to come.

Then again, these two branches specifically have made headlines surrounding the COVID vaccine, and their quick dismissal of those who didn’t take the jab randomly. Given the Anthrax, smallpox, and other “non-essential” vaccines the military hands out and the poor record keeping, it’s no wonder they don’t want to be a guinea pig for this experiment.

Rep. Jason Crow (D-CO), recently spoke to POLITICO about what he sees as the obstacles in getting back on target for recruiting goals. As a former Army Ranger, he has a unique perspective many Representatives and Senators have not gotten. “We’re going to have to provide enlistment incentives and bonuses, and I think we also have to educate people … about military service and what it looks like and what it means.”

Americans don’t want to join for far more reasons than the jab requirement. The headline-grabbing sexual assault allegations, the “woke” leadership and non-serving politicians deciding to turn things into a social experiment, and the horrific compensation package for serving all make things a much harder sell than they should.

Back before Vietnam, if you got called upon to serve you could mostly do it with pride. People treated you differently, and it was most certainly with extra respect and admiration for fighting for their freedom.

While that still exists now, ever since the spitting “baby-killer” days of Vietnam, many are treated or feel like they are considered to be less than nothing. Like their sacrifices don’t matter. Also prior to that employers wanted to give returning Veterans a chance to earn some real money and to put bread on the table. They knew having a good job could help them get their lives back on track.

Now, many Veterans are telling the story of being told their military time doesn’t count. Like they spent 3 or more years off at college, and what they did there was just a professor’s quiz book. Or that their leadership qualities are somehow less than someone with experience and a degree. That’s also where the GI Bill comes in.

With everyone now receiving the GI Bill without cost and automatically for their service, it opens a whole new world of opportunities. The problem is even with that diploma that backs up their years of experience, too many still see it as an unauthentic experience. Why would recruits want that? Especially when they can take a lower-level job in their dream company while going to school, and not have the PTSD-inducing experience many who have left are now talking about. Increase the pay, dump toxic leadership, and watch numbers soar.