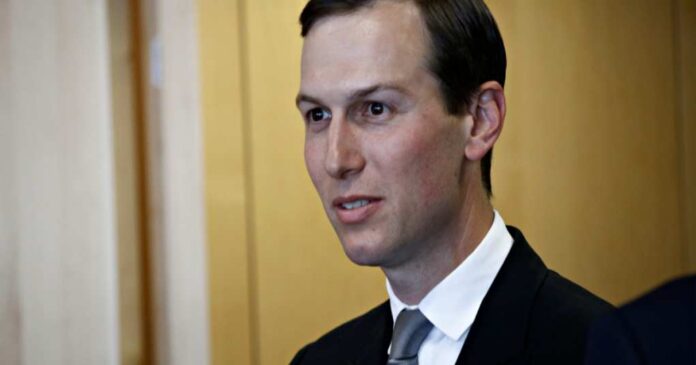 Former President Trump’s son-in-law and senior advisor, Jared Kushner is getting ready to release a memoir. There are people all over Washington who are likely nervous about what might be in the pages. It’s already been made public that Kushner talks about Trump’s former Chief of Staff John Kelly shoving his wife and the president’s daughter, Ivanka.

Kushner’s memoir is set to be published next month and it will details just how toxic the environment in the West Wing was under Trump’s presidency. This will come out just as the gears may be set in motion for Trump to run again in 2024.

One person who is ready to fight back against anything that might be said about him is former Trump adviser Stephen Bannon.

Bannon told Kushner, “I will break you in half,” according to a report by CNN got an early copy of the book.

Kushner’s book is titled, “Breaking History: A White House Memoir.” In it, the author says to Bannon, “Steve, you gotta stop leaking on Gary,” referring to senior economic adviser Gary Cohn. Cohn had told Kushner that Bannon was spreading leaks about him.

Bannon responded by saying, “Cohn’s the one leaking on me.” He also said that Kushner was “undermining” the agenda of the then-president, according to CNN.

“And if you go against me, I will break you in half. Don’t f— with me,’” Kushner describes Bannon saying.

Trump’s son-in-law said that it was a White House joke that Bannon’s duties included leaking to the press.

“Stephen Miller joked to Hope and me, ‘I have a plan to split up Steve Bannon’s extensive workload. Hope, you leak to Jonathan Swan at Axios. Jared, you call Mike Bender from the Wall Street Journal. I’ll call Jeremy Peters from the New York Times, and … we’re done,’” Kushner wrote.

Trump’s son-in-law also notes how President Trump change his opinion on Bannon before eventually firing him in August of 2017. Kushner told one friend, tongue in cheek, that getting Bannon fired was one of his biggest accomplishments in the White House. Although Kushner had little success in his first year in the administration, he said that the firing of Bannon, “partially saves the world from immediate disaster.”

One of Trump’s last acts in office was pardoning Bannon. He had been charged with defrauding donors of more than a million dollars. This was part of a fundraising campaign that was aimed at supporting Trump’s border wall.

Despite Bannon being a thorn in the side of Kushner, he did not oppose Trump’s pardon of Bannon, to the surprise of the president.

“Seriously?” Trump said to Kushner, according to the book. “You would really be for that? After everything he did to you?”

Kushner explained in the book, “Bannon single-handedly caused more problems for me than anyone else in my time in Washington. He probably leaked and lied about me more than everyone else combined. He played dirty and dragged me into the mud of the Russia investigation. But now that he was in trouble, I felt like helping him was the right thing to do.”

Bannon was convicted this month of contempt of Congress by a federal jury because he refused to comply with a subpoena from the House select committee investigating the January 6, 2021, Capitol riot. He has promised supporters that there will be a surprise outcome at the end of the judicial process. Who knows what to expect from Bannon. And who knows how he is going to respond to Kushner’s memoir?