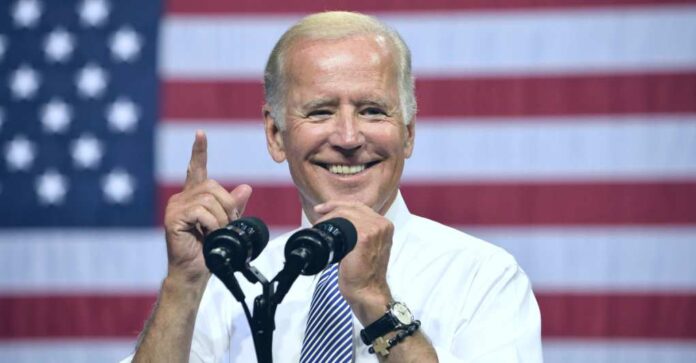 Marshall will go to the floor of the Senate to deliver remarks and during those remarks will push for the Senate to adopt via unanimous consent an eight-page resolution he drafted that would declare it the sense of the U.S. Senate that the situation along the border has deteriorated so badly under Democrat President Joe Biden that it constitutes an “invasion” of the United States of America. When Marshall does this, Democrats are extremely likely to send forward a Democrat senator to object to the motion–thereby blocking it on behalf of all of their members–but the fact that Marshall is pursuing this drastic course of action shows how significant an issue this is to many Republicans.

Marshall Resolution_Right to Repel Invasion 8.2.22 by Breitbart News on Scribd

“I rise to ask for passage by unanimous consent, my resolution to express the sense of the Senate that the unprecedented crisis at the southern border constitutes an invasion on the United States of America, and that it is the constitutional right of State Governors to repel the dangerous ongoing invasion across the southern border,” Marshall will say, according to prepared remarks his office provided to Breitbart News ahead of their delivery. “I encourage my colleagues to support this resolution because the federal government has failed–intentionally or unintentionally–to uphold its obligations to protect the states from invasion under Article IV, Section 4 of the U.S. Constitution.”

During the floor speech, Marshall will also lay the blame for the border crisis squarely at Biden’s feet.

“During his campaign to become president, Joe Biden made it clear to the entire world that if he became president, America would be open,” Marshall will say. “Not open for business, but that our southern border would be open – wide open, for anyone and everyone to violate our nation’s immigration laws, and to take advantage of America’s generosity. Yes, it would be wide open for drug smugglers, convicted murderers, domestic abusers, and sex offenders. Open for terrorist suspects. In 2019, Joe Biden called for ‘all those people seeking asylum’ to ‘immediately surge to the border.’ He pledged free health care for illegal immigrants and pledged support for sanctuary cities. One of his first actions as president was sending proposed legislation to Congress that would provide a path to citizenship for 10 to 12 million illegal aliens residing in the United States. On his first day in office, he halted construction of President Trump’s border wall and halted the Remain in Mexico program.”

Because of Biden’s actions, Marshall will argue, record numbers of migrants are streaming across the border.

“This open border – opened by Joe Biden – has resulted in an unprecedented, unrelenting massive wave of illegal aliens entering our country. Last year, border patrol made more than 1.7 million arrests of illegal immigrants along the southern border, which is the highest level ever recorded, and is on pace to arrest more than two million illegal immigrants along such border during this fiscal year,” Marshall will say. “And now that Joe Biden has prepared to end the Title 42 Policy that enabled us to expel many of those crossing the border back into Mexico, the vast majority of those violating our country’s immigration laws will be released into the interior of our nation, where Democrats will insist they remain for the rest of their lives.”

Marshall will also argue that the invasion is “wreaking havoc” on Americans nationwide.

“Last year, the number of drug overdose deaths in the U.S. topped 100,000, fentanyl being the cause of two-thirds of them. In fact, fentanyl is now the number one cause of death of Americans ages 18 to 45,” Marshall will say. “Last year, border patrol seized at the southern border — 11,200 pounds of fentanyl; 5,400 pounds of heroin; 191,000 pounds of methamphetamine; 97,000 pounds of cocaine; and 10,000 pounds of ketamine – Many, many multiples of the amounts needed to kill every man, woman, and child in the United States. If you speak to border patrol agents trying to deal with this crisis, they’ll tell you the Biden Administration has completely forbidden them to enforce immigration law. They have been made ushers and nurse maids for illegal immigration. This invasion is wreaking havoc on communities all across our country, and it cannot go on any longer. It is long past time for states to protect their interests, because Joe Biden has made it clear the federal government will not.”

Marshall will conclude his speech by saying Biden’s border policies amount to a “dereliction of duty” and again urging the Senate to adopt his resolution.

“President Biden’s dereliction of duty and failure to take care that the laws be faithfully executed at our southern border has directly put the citizens of all 50 States in danger and has resulted in loss of life,” Marshall will say. “Let me be crystal clear, the violent activity and smuggling of drugs, humans, guns, and other illicit goods carried out by drug cartels and transnational criminal organizations meet the definitions of ‘actually invaded’ under clause 3 of section 10 of article I of the United States Constitution; and ‘invasion’ under section 4 of article IV of the United States Constitution; and Governors of all 50 States possess the authority and power as Commander-in-Chief of their respective States to repel the invasion described in paragraph (2). I encourage the passage of this resolution, to stand in solidarity with the Governors of these United States, who must take matters into their own hands to protect their citizens against this invasion.”