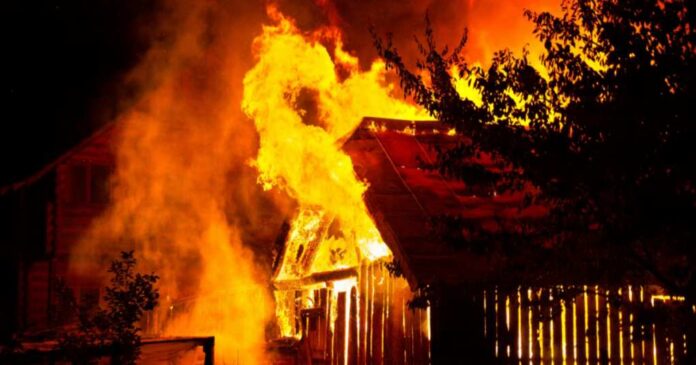 Most of us might not have realized it, but back in May, the US Forest Service began a few controlled burns in the southwestern state of New Mexico. It’s not all that unusual for them, as controlled burns have proven to eliminate the likelihood of wildfires beginning and causing untold amounts of damage and danger.

However, things don’t always go as planned. In the case of two separate controlled burns, one in the area known as Calf’s Canyon and another in Hermit’s Peak, things got out of hand rather quickly, the Associated Press reported. According to Reuters, what began as a slow burn in the right direction soon raged into an inferno that took out some 530 square miles of privately owned meadows, forests, and 432 homes.

Of course, it was all an accident and one that the federal government under Democratic President Biden said they were deeply sorry for. Biden even made a special trip out to the area to speak with the victims, which are mostly “members of centuries-old Indo-Hispanic ranching communities,” according to a Reuters report.

During his June 11 remarks to them in the nearby Santa Fe, Biden said he and his federal government would be “covering 100 percent of the cost.”

And yet, now that the time has come to rebuild in earnest and get these people their homes and livelihoods back, it seems the cost is being laid at the victims’ feet.

Apparently, a federal statute requires cost-sharing in such instances that Biden didn’t mention or waive. And so, by federal law and according to the US Department of Agriculture, these now homeless victims are being told they will have to provide a significant portion of the cost to repair the damage caused by the fires.

Now, to be fair to Biden, his remarks in Santa Fe did come with a bit of an asterisk.

According to the White House transcript, he told the good people of New Mexico that since the federal government started the fires, “we have a responsibility… to deal with the communities who are put in – in such jeopardy.” And so he would cover “100 percent of the cost of debris removal and emergency protective measures for the next critical months.”

However, he did add that further funding would be granted in the future under the Hermit’s Peak Fire Assistance Act. According to the White House, should the law pass, it would provide complete federal compensation for all losses.

The catch, of course, is that the law has not passed yet. And, in fact, it won’t likely even be voted on, let alone funded, until the fall.

So what do the families and fire victims get at the moment?

Well, they can apply for what was promised quick support through the USDA’s Natural Resources Conservation Service or NRCS. According to the Department of Agriculture, “minimal costs” are involved.

This was good news for 55-year-old rancher Daniel Encinias, especially since he didn’t carry home insurance. He needs to rebuild and return to his cattle as soon as possible. For the moment, he, his wife, their three teenage children, and 12 pets are all living out of a camping trailer right next to the ashes of his once 5-bedroom home.

But as Reuters reported, quick or minimal costs had nothing to do with reality. When he applied for assistance to fix his well, he was told that he needed to provide at least 25 percent of the cost based on that waiver Biden didn’t make on a little-known federal statute.

Furthermore, he was told by NRCS officials that it wouldn’t be until September before his application would even be considered. Then it could be another six to 12 months before actual recovery and restoration work began.

Luckily, as a hard-working rancher with many skills, including being a retired electrician, Encinias can do some of the work of rebuilding himself.

But even when it comes to feeding his cattle, he’s had to make major sacrifices. He’s now being forced to buy hay because his baler was destroyed in the fire, and he doesn’t have the funds to buy another.

And Encinias is one of hundreds who are in the same boat.

So much for these people being the “responsibility” of the federal government, huh?