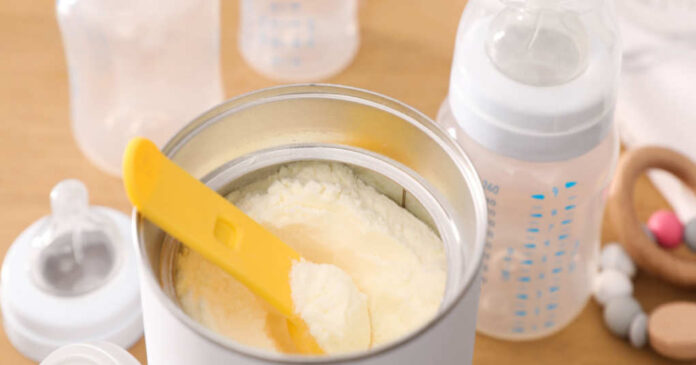 Amidst the ongoing baby formula shortage, a former supervisor with a large manufacturer of the product has alluded to alternate food sources perhaps being a better choice anyway. He claims the FDA has been purposely overlooking severe health violations in manufacturing facilities, putting infants at risk.

The ex-front-line leader with Abbott Nutrition said that his former facility has multiple roof leaks and that food safety measures are lax at best. The plant promotes a culture of fear and its record-keeping of particular batches, as required by law, is atrocious.

Under the blanket of anonymity for fear of repercussion within the industry, the former supervisor is the second ex-employee from Abbott to step up to the plate. Abbott Nutrition, though not the largest producer, feeds roughly one-fifth of America’s infant population and that’s still a lot of diaper-filling bambinos.

The man said that the unmaintained equipment in the plant is highly susceptible to mold growth and that quite often rain dripping through the roof goes ‘kerplunk’ straight into the ingredients being used to whip up a new batch.

He said that much of the equipment being used wasn’t properly designed with food safety in mind and nobody seems to know which batch went where, and when. There would be no way to pull off an effective recall should babies start becoming ill.

“The plant would prep heavily before audits,” he said. “The plant basically turned into a movie set where only things the higher-ups wanted the FDA to see were seen.” This, coupled with the FDA’s willingness to not pry below any surfaces due to the shortage, is a recipe for disaster at the expense of the health of infants.

Despite the Biden administration flying in baby formula from Europe and Australia where manufacturing health standards are an unknown variable, America is still unable to domestically meet the demand.

In part, this is due to a massive and bumbled recall of Abbot Nutrition products when disturbing reports of infant deaths and hospitalizations hit the poop fan. The FDA shut the plant down long enough to convince consumers that repairs that weren’t done, got done, but still, the lull in manufacturing was enough to further contribute to the already existing problem of shortages thanks to supply chain issues.

Abbot claims the former supervisor is just a disgruntled ex-employee with an ax to grind. Abbott divisional vice president of external communications and public affairs, Scott Stoffel said, “The claims made by this unnamed source … are either inaccurate or completely taken out of context.”

He said that without knowing who the source is he can’t verify that the person ever even worked for Abbott. He would also have to know the circumstances under which the employee quit to make a fair assessment of the persons damning accusations.

The FDA coughed up a blanket non-commital statement in an attempt to justify its head-turning. After saying, “We take seriously our duty to prevent and respond to foodborne illnesses and food contamination events,” they spit the hook out.

A spokesperson for the FDA contended that its walk-through inspections are only one small cog in the wheel of food safety. Since they can’t be everywhere at once they leave it up to the individual plants to do the right thing and it goes under the assumption that they are. Case closed.

They say goat’s milk is better than baby formula so you might be well-advised to make the switch. At least until if ever the FDA picks up its game and starts earning the tax money we’re wasting on them.

Just as the FDA assumes that all of the manufacturing plants are doing the right thing, based on what we know, we’re going to assume that they aren’t. But don’t let the facts sway your opinion…