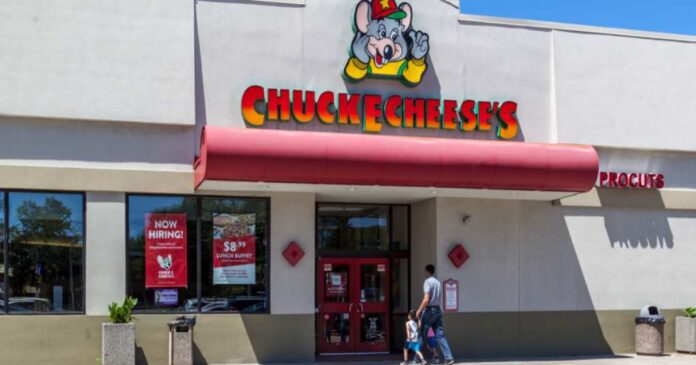 Chuck E. Cheese isn’t as popular as he used to be. After all, it’s hard to want to go into a place to eat pizza where a rat is the mascot. It’s a poor choice, for sure.

Today’s society is all about being hurt and offended – even by the strangest of sources.

Natyana Muhammad has posted a video on social media to claim that Chuck E. Cheese is racist. While at a Wayne, New Jersey location, her black two-year-old daughter was “purposely” ignored and didn’t get a high-five.

The video that Muhammad showed was of the rat, sorry, mouse, high-fiving children who were on the stage. The daughter was not on stage and, therefore, did not get a high-five.

Imagine having nothing else better to do with your time than accusing a children’s pizza franchise of racism because your toddler didn’t get high-fived. The mascot may have done her daughter a favor in the long run. There’s no telling when the last time that costume was laundered. And the thought of a giant mouse touching you could result in a long-lasting fear of rodents.

Muhammad tweeted a message with the video to say that “When confronted, he ignored me as well.”

Wait, you mean the children’s mascot didn’t want to get into a confrontation with an angry parent? Obviously.

The manager of the Chuck E. Cheese explained that it’s possible that the mascot didn’t see her. And that is possible, given the size of the head and the small stature of the child. Yet, Muhammad believes that the video is all of the proof that she needs to claim that her daughter was “racially discriminated against.”

So, because a teenager in an oversized head couldn’t see a small child (who wasn’t on the stage like all of the other kids), it’s racist.

Chuck E. Cheese has reached out to her to have the mascot take a picture with her daughter. However, Muhammad shared on Twitter that the gesture was insufficient.

Other users on Twitter have tried to explain that it is entirely possible that the mascot may not have seen her daughter. Others have even gone as far as saying that the race of the person wearing the costume is unknown, therefore, it may not be racist.

Racism is not as rampant as this person claims that it is. No one is going to go out of their way to snub a child, regardless of color, at a place that literally claims that it’s the place “where a kid can go to be a kid.”

Chuck E. Cheese has also released a statement: “Chuck E. Cheese is saddened when any family or child has a less than perfect experience. We want to thank the family who brought this to our attention at our Wayne, NJ location and for giving the onsite manager an opportunity to apologize and address their concerns in person. As home to millions of families and kids every year that celebrate the big and small milestones, including fun, our goal is to create an inclusive experience for children and parents of all ages, races, ethnicities, religious backgrounds, and learning differences. Our mission is to provide a fun and a safe place Where A Kid Can Be A Kid, and all cast members are trained to ensure that we live up to this promise.”

Here’s the real reason why Muhammad won’t let the issue go. She’s alluded to the possibility of taking the chain to court. And there it is. It’s not really about racism but about money. She simply saw an opportunity to get offended and took it.