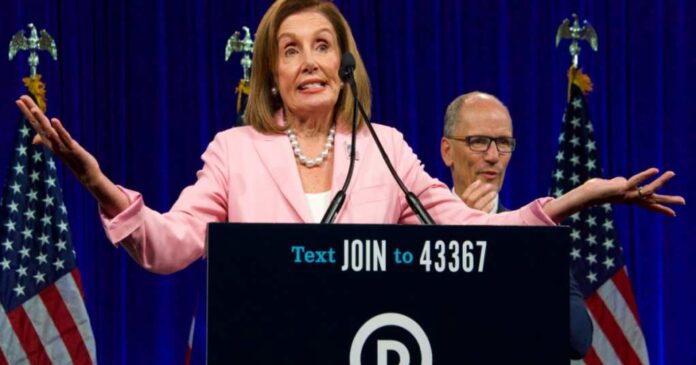 Neither wind, rain, sleet nor hail could keep Nancy Pelosi from visiting Taiwan. She defied all advice against making the trip and she thumbed her nose at China for threatening to shoot down her plane if she got anywhere close to its highly disputed emancipated neighbor.

Without incident, Pelosi’s plane touched down in Taipei where she was greeted with the fanfare of a 5-time Oscar winner. Electronic billboards flashed heart emojis, as did the city’s tallest skyscraper.

The near-rapture type welcome concluded with Pelosi being presented with Taiwan’s greatest government honor, the ‘Order of the Propitious Clouds with Special Grand Cordon.’

Upon being presented the prestigious award by Taiwan’s female president, Tsai Ing-wen, Pelosi said, “It’s such a high honor to receive the Order of the Propitious Cloud with Special Cordon from you. We are so proud of your leadership: a woman president in one of the freest societies in the world. It is with great immense admiration for your leadership, and great personal humility, that I accept this award.”

Now, all kissing and face-hugging aside, what did Pelosi’s defiant visit accomplish, if anything? The correct answer would be nothing earth-shattering. Even with the Chinese getting all miffed, as with all political visits, this one will soon be forgotten.

It’s the bumbled public narrative of the Biden administration’s explanation of the trip that’ll be long remembered. It’ll be China’s perception of the U.S. escalating its already strong ties with Taiwan that’ll linger and fester.

Beijing went so off the hook over Pelosi’s visit that officials in Beijing warned Joe Biden to “restrain” the third-highest ranking U.S. official from violating China’s territorial integrity by committing “perverse acts.”

Attempting to quell the roaring dragon, the Biden administration issued a hodgepodge of contradictions and denials concerning the reason for the planned trip that only served to further fuel the flames. The Chinese were seeking a direct answer that never came.

Because of the contradictions, the Chinese were able to construct a savage propaganda campaign aimed straight at Pelosi to persuade her to cancel her travel plans. But there’s nothing more dangerous than a woman scorned.

Pelosi remembers the year 2015 when as a U.S. Representative she took part in a march against the Chinese government in Tiananmen Square. She caught the attention of government officials when she unfurled a flag bearing the names of the dissidents who were riddled with bullet holes during the 1989 protests at the same location.

Pelosi was quickly escorted out of China and told to never return. Taiwan no longer technically belongs to China, but her showing her face there was still seen as a slap in the face, even 30 years later.

Former assistant secretary of state for the Bureau of East Asian and Pacific Affairs, David R. Stilwell, made no bones about revealing the real reason behind Pelosis trip.  It was purely antagonistic.

“By openly arguing among ourselves about Pelosi’s travel, we made the trip a public spectacle, forcing Beijing to react. Had we done the trip quietly, as we usually do, it would have generated none of the brinkmanship we’re seeing now.”

While it was probably a bad idea for Pelosi to stir the chow mein, and even worse for Biden to be so wishy-washy about why she was so adamant about going to Taiwan, it is kind of humorous. And since U.S. relations with China couldn’t possibly get any worse, no harm, no foul.

It’s not often that Nancy Pelosi can catch a break, but we gotta give her this one. Now that her f*** you has been clearly stated, maybe she’ll go out in a blaze of glory and contently slip into retirement. We should be so lucky.