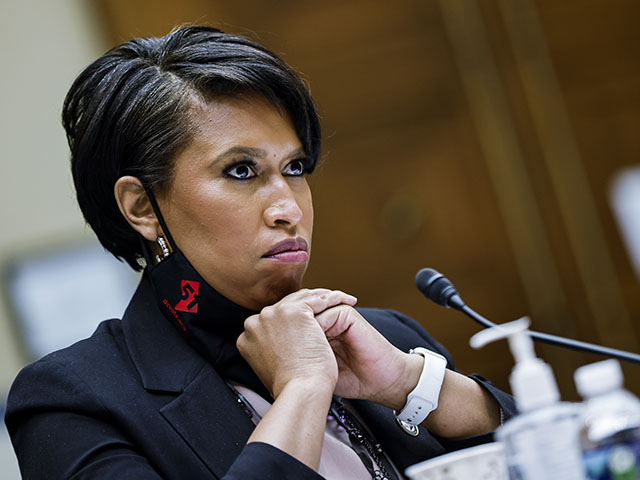 This week, Bowser again requested Biden’s Department of Defense to deploy the National Guard after her last request was rejected by the administration. Bowser posted the letter she sent the Pentagon to her Twitter account:

A bus that traveled from Texas carrying migrants is seen within view of the U.S. Capitol on Thursday, Aug. 11, 2022 in Washington, DC. (Kent Nishimura / Los Angeles Times via Getty Images)

Migrants disembark a bus from Texas within view of the U.S. Capitol on Thursday, Aug. 11, 2022 in Washington, DC. (Kent Nishimura / Los Angeles Times via Getty Images)

Migrants, who boarded a bus in Texas, listen to volunteers offering assistance after being dropped off within view of the US Capitol building in Washington, DC, on August 11, 2022. (STEFANI REYNOLDS/AFP via Getty Images)

Biden officials, speaking anonymously, have said the president is concerned about “the optics” of a Democrat mayor calling record-setting illegal immigration levels a “humanitarian crisis, as Bowser has done.

For months now, Abbott has sent thousands of border crossers and illegal aliens to Washington, D.C., as well as New York City — two of the nation’s premier sanctuary jurisdictions with Democrat mayors that have promised to shield illegal aliens from arrest and deportation.

The few thousand border crossers and illegal aliens that have been bused to Washington, DC, still pales in comparison to the level of illegal immigration seen by American border communities under the Biden administration.

Abbott’s migrant busing policy has come as the Biden administration has hugely expanded its Catch and Release operation whereby thousands of border crossers and illegal aliens are released into the United States interior every day.

From February 2021 to May 2022, more than a million border crossers and illegal aliens have been released into American communities by the Biden administration.