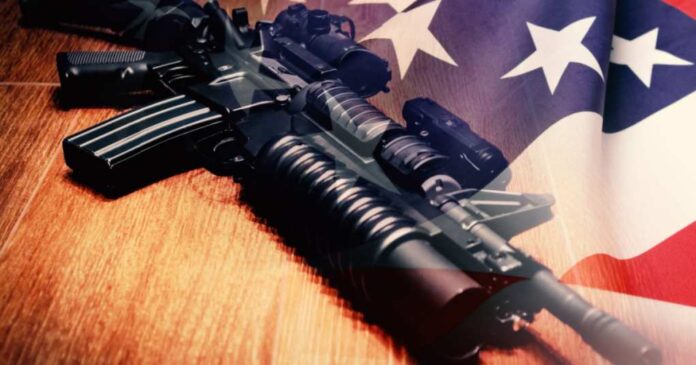 Fight fire with fire, as the old adage says. But no matter how you say it, schools in Madison County, North Carolina, are not going to be left at the mercy of a crazed mass shooter with a high-powered weapon. They plan on fighting AR-15s with Ar-15s, and the sheriff has made sure that every school in the county has one.

In the wake of 19 children and two teachers being killed in Uvalde, Sheriff Buddy Harwell decided enough is enough. In June, Harwell announced via a Facebook video, his plan to install safes in all six of the county’s public schools.

Each safe would contain an AR-15, loads of extra ammo, and other types of defense weapons such as mace, stun guns, and even smoke grenades. His plan has now been implemented. All six schools are locked and loaded.

“We were able to put an AR-15 rifle and safe in all of our schools in the county,” the sheriff said. “We’ve also got breaching tools to go into those safes. We’ve got extra magazines with ammo in those safes.”

Harwell went on to say, “I hate that we’ve come to a place in our nation where I’ve got to put a safe in our schools, and lock that safe up for my deputies to be able to acquire an AR-15. But, we can shut it off and say it won’t happen in Madison County, but we never know.”

“I want the parents of Madison County to know we’re going to take every measure necessary to ensure our kids are safe in this school system. If my parents, as a whole, want me to stand at that door with that AR strapped around that officer’s neck, then I’m going to do whatever my parents want as a whole to keep our kids safe.”

The sheriff’s office will also be conducting joint emergency exercises with the schools by simulating active shootings. To calm the fears of some parents, Harwell said the guns will be locked in safes that will be kept in undisclosed locations for easy access by arriving officers. The weapons are not for the use of school staff.

“Our community has always stood together to ensure the safety of our children. I have school resource officers who are certified deputy sheriffs in every school in our county. But we’ve sometimes seen that having just a deputy armed with a handgun isn’t enough to stop these animals. That’s why I’ve decided to arm all of my school resource officers with an AR-15 rifle, optics, and accessories,” Harwell said.

The effort isn’t costing taxpayers anything as community members have funded the entire project with generous donations. School resource officers have all agreed to go through additional tactical training to gain additional proficiency in using the new high-powered weapons.

God forbid any would-be shooter comes within 100 yards of any school in Madison County. Harwell said that above all else, the kids in his county are his top priority and he’ll do whatever it takes to protect them.

“So to those who might be looking to terrorize or harm our Madison County kids: Don’t bring that foolishness to Madison County, because it won’t end well,” He added.

The good citizens of this rural county in western North Carolina are fortunate to have a guy like Harwell watching their children’s backs, and that’s why they didn’t hesitate to support his bold move. We need more like him.