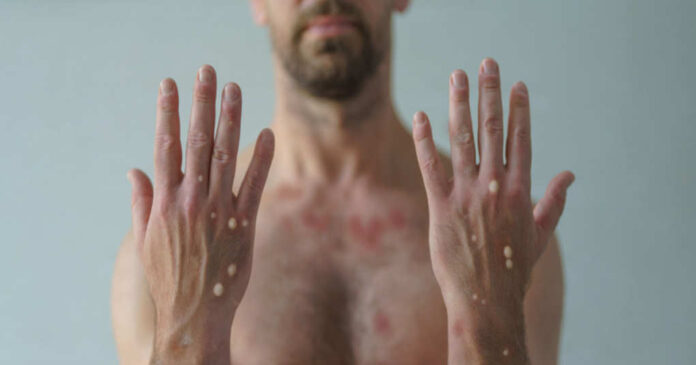 While the 1970s and early 1980s brought the globe a lot of good things, the progression and rapid spread of HIV and AIDS showed the American people a lot about their fellow man and the government. With reports initially that it was only affecting the LGTBQ community, the initial outcry went strongly against the community.

Now as monkeypox is spreading across the US with the same community being heavily impacted, the Feds are trying not to make the same mistake.

Will Goedel, a professor at the Brown University School of Public Health, recently spoke with The Hill. “The tightrope you’re trying to walk is making sure that people don’t see it as just a gay men’s illness, but not alarming people so that they use up resources that need to go to the people who need the most right now.”

After first being seen in Massachusetts nearly three months ago, Health and Human Services Secretary Xavier Becerra declared it a public health emergency in the US on August 4th. With total cases in the US now over 7,000, major concentrations are popping up in California, Illinois, and New York. Each of these states has correspondingly provided emergency orders to distribute resources like vaccines and increased testing to become more efficient in light of the surging demand.

San Francisco public health officer Susan Philip also spoke with The Hill about the challenges they are facing.

“We have not had confirmed cases yet in children under eight or people who are pregnant; the health of men, gay men, and others and LGBTQ communities is extremely important. And that was — that was a key point that we wanted to message alongside the importance of understanding about monkeypox… It’s really important for us not to stigmatize any groups so that they feel comfortable getting information from us or from community partners, that they understand how they can access services, including vaccine and treatment and testing.”

Even though the disease is spread through close contact, they have resisted the urge to push a message suggesting gay people limit their partners. Given the blowback that came from delivering that message during the HIV/AIDS campaigns in the 80s, this is a tightrope they need to walk carefully so as not to ostracize an already heavily targeted community.

Monkeypox is spread via prolonged contact with the lesions that serve as its trademark characteristic. Sexual contact often precludes this outbreak, but authorities have consistently resisted calling this a sexually transmitted disease, especially since sexual fluids are not required for its transmission. As a result, many have warned against pushing an abstinence policy, as many will in turn stop listening to other guidance from officials, thus making other diseases easier to push forward.

The HIV/AIDS epidemic was an ugly one for LGTBQ relations with the Federal government as many officials made its victims the target of hate and aggression from people who saw it as a sign of end times or other biblical-related aggression. As a result, the community has become heavily entrenched in public health policy, and they are some of the first to step up when health interventions and public health care are required.

Currently, the Feds are looking for more treatment and vaccination options, but not getting very far thus far. For his lack of action, President Biden has been facing heavy criticism from both lawmakers and advocates who claim that the federal response to this new crisis is inadequate as cases are surging but testing and vaccinations are incredibly low.

The Food and Drug Administration has approved the use of an additional 800,000 Jynneos vaccines. This smallpox shot made in Denmark by the company Bavarian Nordic is also utilized as a vaccine for monkeypox. Currently, they are also testing the capabilities of using a fifth of the normal dose so they can stretch the supply.