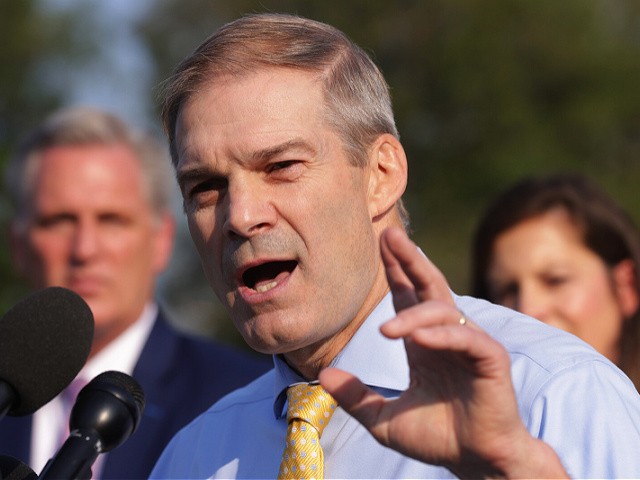 Breitbart News spoke with Jordan and his staff about the whistleblowers after multiple reports circulated this week that took comments Jordan made on the matter during a recent television appearance out of context.

Jordan said Sunday to Fox News’s Trey Gowdy that 14 whistleblowers from within the FBI had come forward to his office:

Fourteen FBI agents have come to our office as whistleblowers, and they are good people. There are lots of good people in the FBI. It’s the top that’s the problem. But some of these good agents are coming to us telling us this is bologna what’s going on, the political nature now of the Justice Department.

Several reports, such as ones from Just the News, Benny Johnson, Townhall, and others, wrongly associated the 14 whistleblowers with the FBI raid that occurred August 8 at former President Donald Trump’s Mar-a-Lago residence.

Newsweek and MSNBC’s Maddowblog, by contrast, cast doubt on the number of whistleblowers. Newsweek reported on a “wave of skepticism” triggered by Jordan’s comment, while MSNBC’s Maddowblog derided Jordan’s “track record as a serious lawmaker.”

Jordan asserted to Breitbart News that he has in fact had 14 whistleblowers speak to his office about the Justice Department and FBI but that all of them approached his office prior to the Trump raid.

“It started when we realized what the Justice Department was doing relative to parents and the whole school boards issue,” Jordan said, in reference to allegations one whistleblower made to Jordan’s office in November 2021 that the FBI was taking counterterrorism measures to investigate parents who it deemed a threat at school board meetings.

Jordan had another whistleblower contact him in March 2022 who raised questions about “the progress and extent” of the FBI’s investigation into two pipe bombs that the FBI said were placed near the Republican National Committee and Democratic National Committee the night before the January 6 Capitol riot.

In May 2022, Jordan cited “several whistleblowers” who had contacted his office with claims that the FBI was retaliating against agents who “engaged in protected First Amendment activity on January 6, 2021.”

When a whistleblower contacts Jordan, Jordan and his team then proceed to vet the whistleblower and his or her allegation, one of his aides told Breitbart News.

Jordan keeps a record of each whistleblower complaint and if useful information has come of the complaint, the aide explained. The aide noted Jordan had been able to use information from 14 whistleblowers but that Jordan’s records contained names of more than 14 individuals who had made at least initial contact with his office.

Jordan, who has served on the Judiciary Committee since he joined Congress in 2007, said, “This is truly not something I’ve ever seen, where you have this many people, all FBI agents, all coming to us as whistleblowers.”

“I think the reason they come to us is they know they can trust us and we’ll will work with them,” Jordan said. “But when they come to us in the minority, all we can really do is begin to tell their story. We can’t subpoena. We can’t do the things that you can typically obviously do in the majority, but yet they’re still willing to come forward, which I think underscores how political that place has become.”

Should Republicans take the majority in November, Jordan is poised to serve as chair of the committee and has already publicly indicated his intent to formally investigate the Justice Department and FBI.

The letters become public correspondence and therefore create awareness about allegations being made against the FBI and Justice Department, but confirming the allegations and holding those relevant accountable would require Republicans to schedule hearings and potentially issue subpoenas, which they cannot do in the minority.

In terms of responsiveness from Garland or Wray, Jordan said, “It’s basically nothing.”

“And if we get something back, it’s usually a pretty cryptic one or two paragraph response,” Jordan added.

Breitbart News obtained one response to letters Jordan sent in November 2021 demanding an assortment of documents related to the school boards issue, including one letter, sent November 16, about the aforementioned whistleblower allegation.

The Justice Department’s response, which was sent two months later, reveals the department declined to provide Jordan with the requested documents. It can be read below:

“It’s been on all kinds of issues, but the overall theme here is the political nature,” Jordan said. “Fourteen whistleblowers have come to us, and, frankly, we anticipate more.”