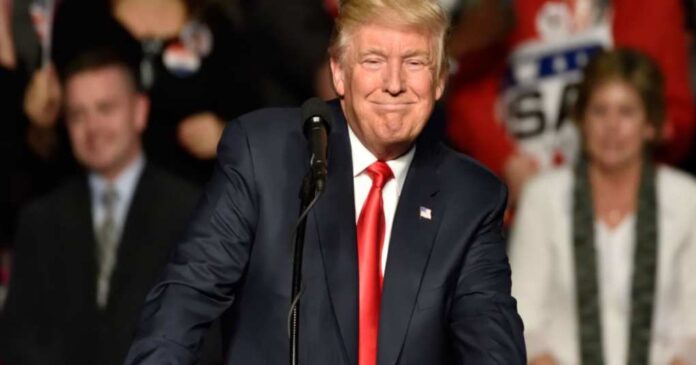 In several posts on his social media platform, the former president first mockingly endorsed lawyer Dan Goldman in his race for Congressional District 10 in New York, hailing him as the man who “headed up the Impeachment Committee and lost.”

“Lawyer Dan Goldman is running for Congress, NY-10, and it is my great honor to Strongly Endorse him,” Trump began. “I do this not because of the fact that he headed up the Impeachment Committee and lost, but because he was honorable, fair, and highly intelligent.”

“While it was my honor to beat him, and beat him badly, Dan Goldman has a wonderful future ahead,” the former president added. “He will be very compassionate and compromising to those within the Republican Party, and will do everything possible to make sure they have a fair chance at winning against the Radical Left Democrats, who he knows are destroying our Country.”

“I would like to thank Dan for fighting so hard for America, and for working so tirelessly to stop ‘Trump,'” he concluded. “He was not easy to beat, but winning against him made me realize just how very talented I am!”

The former president’s “endorsement” of Goldman can easily be interpreted as a satirical hit against the New York Times, which also endorsed Goldman in the Democrat primary last week, citing his “work on the impeachment trial” and his “close working relationships in Washington — an advantage that should help him deliver on the issues most important to New Yorkers, even as a new member of Congress.”

As Insider noted, the New York Times received blowback and criticism for its endorsements, beings that they were all “three white guys.”

“The spectacle of the Times endorsing three white guys was itself enough to draw attention, but capping it off by backing Goldman, a self-funding heir to the Levi Strauss fortune, has brought an unusual amount of attention to the paper’s endorsement process,” noted Insider.

Trump then directed his troll toward the fight between Rep. Jerry Nadler (D-NY) and House Oversight Chair Carolyn Maloney (D-NY), a race that ironically developed out of the Democrats’ botched gerrymandering efforts, forcing two top Democrats to compete against each other for a single seat.

“A vote for Carolyn Maloney in NY-12 is a vote for the future! She is a kind and wonderful person, who has always said terrific things about me, and will support me no matter what I do, just as I supported her very early on. She begged for a check with no quid pro quo, and I gave it to her. In fact, I gave her many,” the former president said.

“On the other hand, Jerry Nadler is likewise a hard-driving man of the people, whose energy and attention to detail is unlike anyone else in Congress,” he added. “He is high energy, sharp, quick-witted, and bright. You can’t go wrong with either, but Carolyn Maloney is the better man. She will lead our Country into a very GREEN and prosperous future. Carolyn has my Complete and Total Endorsement, she will never let our Conservative Movement down!”