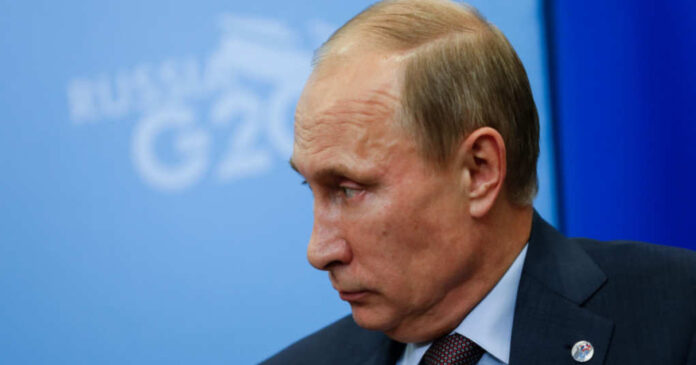 Vladimir Putin didn’t want Russia to have to invade Ukraine, but what else could he do? Somebody somewhere had to teach the American dogs to poop in their own yard. Picking on one of the runts in their litter of allies was a warning shot to the U.S.A. to keep its Yankee influences to itself. Any tyrannical mush-minded self-elected leader would have done the same thing. Right?

This is how Putin’s stymied thought process malfunctions. He said it himself at a high-level security conference to an audience of military leaders from Asia, Africa, and Latin America.

“They need conflict to maintain their hegemony,” he said of the U.S. “That’s why they have turned the Ukraine people into cannon fodder. The situation in Ukraine shows that the United States is trying to drag the conflict out, and it acts exactly the same way trying to fuel conflicts in Asia, Africa, and Latin America.”

U.S. and E.U. support for Ukraine has left Russia scraping the trenches for a little extra help in wrapping up what it started but can’t finish. Putin didn’t anticipate a pack of wolves rushing in to save the pup he was attempting to quickly butcher.

Western sanctions are destroying what remains of Russia’s fledging economy as more and more of its soldiers are being buried in pine boxes. Putin’s people, whose morale and pride has tanked, aren’t feeling the love. Citizens are finding it increasingly more difficult to waste their few remaining rubles on their leader’s fairytale lies.

Of course, Putin couldn’t let U.S. House Speaker Nancy Pelosi’s infamous trip to Taiwan go without twisting it into an example of the U.S.s burning desire to “foment global instability.” He compared this action to Ukraine by claiming there was no difference between the two.

It’s Putin’s contention that Russia should have been left to waltz into Ukraine without interference, and that the U.S. had no business jumping its fence into what he still considers Russia’s backyard.

Read what Putin said with a Russian accent for the full experience. “The American adventure in Taiwan wasn’t just a trip by an irresponsible politician. It was part of a deliberate and conscious U.S. strategy intended to destabilize the situation and create chaos in the region and the entire world, a blatant demonstration of disrespect for another country’s sovereignty and its own international obligations.” You may now breathe.

Spitting in the eye of democracy, Putin said that “Western global elites” were underhandedly trying “to shift the blame for their own failures to Russia and China.”

On the more ‘yikes’ side, he said, “No matter how hard the beneficiaries of the current globalist model try to cling to it, it’s doomed. The era of unipolar world order is nearing its end.”

Russian Defense Minister Sergei Shoigu was next up to the podium where he ‘woe-is-me’ bitched about the West supplying Ukraine with weapons. He brought the thunder when it came to Western allies sending in instructors to train Ukraine’s military in the deadly art of disobedience.

Shoigu promised his audience that Russia would never resort to nuclear warfare and that its stockpile of world-destruction level weapons is merely meant as a deterrent to unfounded aggression. He also claimed that Russia had destroyed its chemical weapons, so not to worry.

Whether or not the tag-team duo was successful in drumming up support is yet to be seen. These types of events don’t require immediate answers. The attendees would prefer to be back in the safety of their own countries when they hopefully decline Putin’s request for Russia’s much-needed lifeline.