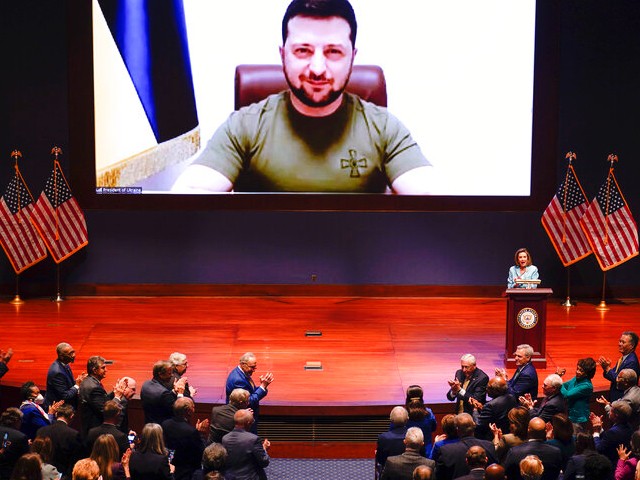 The gift comes even as Americans continue to suffer from the domestic challenges of food shortages, inflation, gas prices, and a porous southern border flooding the country with almost five million illegal immigrants.

The cash splash funded by U.S. taxpayers comes on Ukraine Independence Day and represents the biggest one-time package to date in the six-month-old war, far exceeding the $1 billion delivery earlier this month.

The Associated Press reports contracts for as many as three types of drones and other weapons, ammunition and equipment will benefit from the funding, even though it may be a year at least until they see the battlefield.

Officials told AP the aid will include money for the small, hand-launched Puma drones, the longer-endurance Scan Eagle surveillance drones, which are launched by catapult, and, for the first time, the British Vampire drone system, which can be launched off ships.

Several officials spoke to the outlet on condition of anonymity to discuss the aid before its public release.

The new package is intended to reassure Ukrainian officials that the U.S. intends to keep up its support regardless of the day-to-day battlefield wins and setbacks while building on the first direct shipments that arrived in February within days of the Russian invasion.

NATO Secretary-General Jens Stoltenberg noted the more extended focus Tuesday as he reaffirmed the alliance’s support for the conflict-torn country.

“Winter is coming, and it will be hard, and what we see now is a grinding war of attrition. This is a battle of wills, and a battle of logistics. Therefore we must sustain our support for Ukraine for the long term, so that Ukraine prevails as a sovereign, independent nation,” Stoltenberg said, speaking at a virtual conference about Crimea, organized by Ukraine and covered by AP.

The U.S. has already allocated some $10.6 billion in military aid to Ukraine since the beginning of the Biden administration, including 19 packages of weapons taken directly from Defense Department stocks since August 2021.

U.S. defense leaders are reportedly eyeing plans that will expand training for Ukrainian troops outside their country, and for militaries on Europe’s eastern and southern flanks that feel most threatened by Russia’s aggression.

As Breitbart News reported, while the Biden administration works to help Ukraine, back home voters are more concerned with immediate issues impacting their lives.