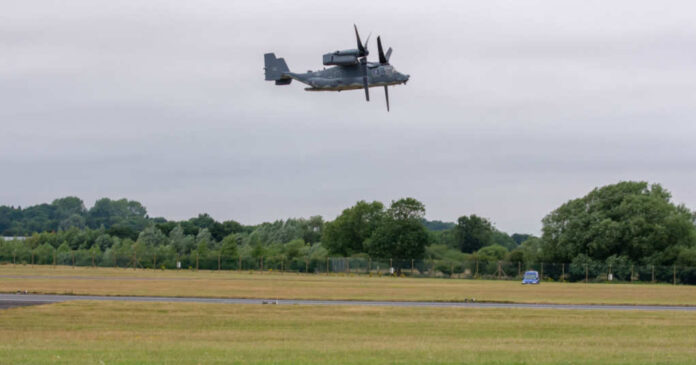 Ever since the CV-22 Osprey debuted, this child’s fantasy become reality has been a dangerous bird to get on. For many, the idea of trusting something that can take off like a plane but hover like a helicopter was never going to happen. This wasn’t a stable aircraft, nor did it have the prerequisites to fully make it a proper plane or helicopter.

“We absolutely owe the air crew information about why this is happening and how we’re going to mitigate it. In coordination with the Joint Program Office, AFSOC has been unable to gather enough engineering data analysis to accurately identify root cause, so it’s unknown if it’s mechanical, design, software, or some combination of any of those. The safety of our Airmen is of the utmost importance, therefore no AFSOC CV-22s will fly until we will determine the cause of the hard clutch engagements and risk control measures are put in place.”

This grounding comes on the heels of a Marine Corps investigation into their version of the Osprey, the MV-22B variant. This investigation was for a March incident in Norway that left four Marines dead. In that instance, the finding was that the pilot exceeded the limits of banking while in flight. Another crash in June in Imperial County, CA resulted in the death of five Marines and is still under investigation.

While their big brother Navy flies the CMV-22B. Both of which are very similar to the Air Force’s version CV-22. The Marine Corps does maintain oversight of the entire V-22 program and has only recorded 15 hard clutch engagements, with the Marine Corps recording 10 of those, the Air Force with five, and the Navy having none.

In a statement from the Marine Corps, they admit they have noticed the problem, but have yet to ground the fleet. “The hard clutch issue has been known to the Marine Corps since 2010, and as such, we have trained our pilots to react with the appropriate emergency control measures should the issue arise during flight.”

This decision by the Air Force is not an uncommon stance for them to take in this situation, as their standards tend to be higher than other services in both equipment and lifestyle. In addition to their standards being higher, they expect more from their equipment and how it performs. When something producing these kinds of catastrophic failures is unacceptable. Now they are working to come up with both short-term and long-term solutions.

With no established timetable, the Air Force is taking the smart direction to not limit the grounding and instead perform a proper and full investigation. This is uncommon for many branches, as they would rather field test, see what happens as they take notes, and figure out what happens by making small changes here and there.

This is also a smart play because failure up there means gravity kicks in and the feat of defying gravity with the Osprey fails and it falls fast. This is a dangerous thing to test, so time is of the essence, but being grounded will help ensure complete success in finding a solution to these problems.