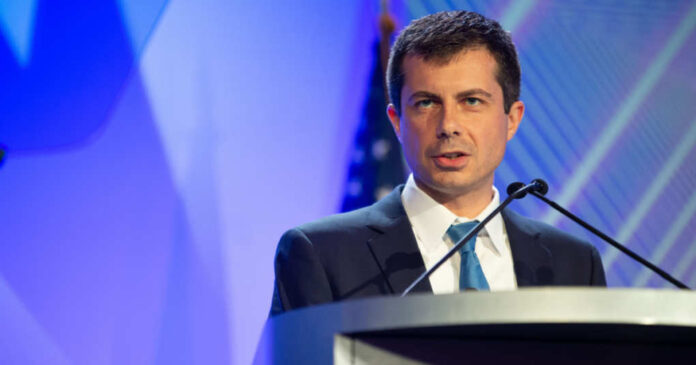 Pete Buttigieg, the Secretary of Transportation, really has no clue as to what he’s doing. And why should he? He was the small-town mayor of South Bend, Indiana before he decided to run with the big dogs and make a play for the presidential primaries.

The only reason he got the job that he’s in now is that he stepped down so that Biden could win the primaries. This is sort of a “thank you” present.

And he’s failing miserably in the position. Don’t even get us started about the whole “buy electric so that you don’t have to worry about gas prices” perspective that he has.

Right now, we’re dealing with a big problem in air travel. Airlines are canceling and delaying flights left and right. It’s not as though they’re happy about it. They’re dealing with unprecedented staffing issues all because of COVID.

Buttigieg doesn’t want to hear about their excuses. Instead, he’s issued the airlines a warning.

The Transportation Secretary sent a letter to multiple airlines. “The level of disruption Americans have experienced this summer is unacceptable. In the first six months of 2022, roughly 24% of the domestic flights of U.S. airlines have been delayed and 3.2% have been canceled.”

The airlines have also been faced with a significant amount of demand. Now that COVID has been put to rest and people can fly without being smothered under three layers of fabric, more people are taking to the air. They want to take vacations. They want to visit family. They just want to get away.

Unfortunately, it hasn’t been that easy.

Some flights have been canceled or delayed, causing people to miss the whole reason they were flying. And in order for some to reach their destinations, they have had to rebook flights with other airlines while waiting for credits that never come.

Buttigieg commented, “Americans expect when they purchase an airline ticket, they will arrive at their destination safely, reliably, and affordably.”

Obviously, but it doesn’t seem as though Buttigieg understands the struggles of the airlines. They don’t have enough ground control. Heck, they don’t even have enough pilots in some instances.

The Department of Transportation is set to launch a website before Labor Day weekend. It will tell travelers about cancellations, delays, and refund policies. This seems counterintuitive since the airlines have all of this information available on their own sites.

Buttigieg is demanding that the airlines provide “clear and transparent information” about what will happen when people experience a disruption and what the airline will do.

All of this is great, but what’s going to happen if the airlines don’t get the situation under control? Is Buttigieg going to fine the airlines? Is he going to demand that the federal government create some kind of bail-out?

Right now, Buttigieg is all about words to make it look as though he’s really doing something,

Airlines for America has already identified that the airlines know what is going on. There have been staff shortages, and a lack of pilots, that have led to delays and cancellations. Additionally, U.S. airlines have already issued over $21 billion in cash refunds to its customers in 2020 and 2021.

The real question has to be whether Buttigieg would have done anything had it not been for a letter that Bernie Sanders sent him. Sanders wrote a letter to Buttigieg in June to say that airline tickets have risen and so have the number of cancellations, calling it “unacceptable.”

Now, two months later, Buttigieg is basically forwarding that letter to the airlines to say that it’s “unacceptable.”

Again, it’s just words. Meanwhile, we’re in the trenches dealing with the reality. And all we get out of it is a website. Thanks, Buttigieg. And you wonder why you aren’t the president right now?