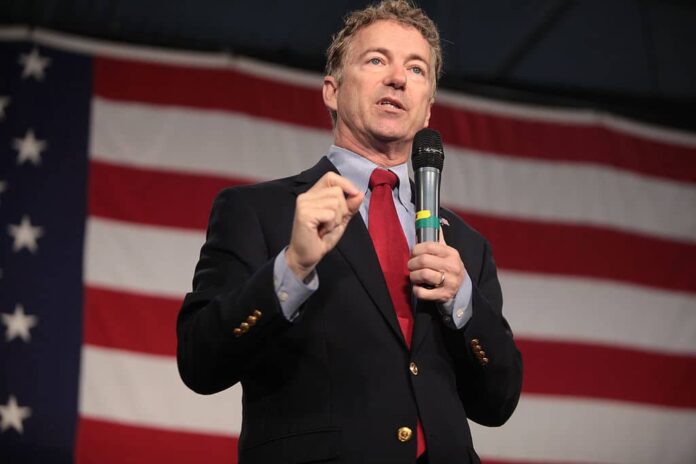 Senator Rand Paul is a true patriot standing in the way of destructive forces that would destroy the United States. His refusal to bow to Democratic pressure regarding the vaccination and pandemic nonsense has earned him a spot on their top ten hated list. He is hated by the Democrats so much that one of their followers felt it necessary to mail him a package that had white powder inside of it.

The death threat is another way the liberals seek to pressure conservatives to fall in line and submit to their rule. The white powder that was sent to the senator was a threat of violence. It was sent directly to his Kentucky home. And the coward that sent it to him would not even put his name on the package.

The cowardly attacker put on the envelope a picture of Rand Paul getting his head beat in and having a gun pointed at his head. The message was full of foulness as it stated, “I’ll finish what your neighbor started you motherf***er.”

Rand Paul is not a person that goes around stirring up trouble. He is a person that loves America and wants to keep it moving forward by letting people live according to the Constitution and not the will of the Democrats.

Paul is taking this attack on himself and his family very seriously. In 2017 he was attacked by his neighbor that has left lasting scars. The loony liberals only know how to enact violence to get what they want. They have forgotten to live peacefully with all men.

Paul stated that “I take these threats immensely seriously. As a repeated target of violence, it is reprehensible that Twitter allows C-list celebrities to encourage violence against me and my family.”

Liberal celebrities are the ones that are inciting violence against him. They hate what he stands for, and they stand behind the camera complaining about conservative values and standing up for what is right.

What he calls the “c-list celebrities” refers to people such as Richard Marx. He stated that he targets the senator because he hates what he stands for. Marx contradicts himself when he states that “I never incited nor even suggested anyone be violent. Certainly not towards the traitor known as Rand Paul. I’m just saying that the fact someone slugged him doesn’t break my heart.” And yet, he praises Paul’s attacker for punching him in the face and nearly killing him.

Rand Paul was sent to the surgery room to have part of his lung removed. Rene Boucher was his attacker and is now serving prison time for his role in nearly killing the man.

Paul would point out that “Unfortunately, I will have to limit my August activities. Part of my lung damaged by the 2017 assault had to be removed by surgery this weekend. The doctors, nurses, [and] staff at Vanderbilt University Medical Center were great. I should be able to return to the Senate in September.”

The cowardly attacks against the patriot cannot stop him from coming back stronger than ever. The medical professionals that worked on his body were able to fix him up for service. His neighbor was mad and tackled Paul and ended up breaking six of his ribs. His injuries would lead to several bouts of pneumonia and other complications.

2017 was not the last time Paul would be threatened with death. In 2018 he received a call from a man that was going to kill him and all of his family.

Rand Paul stated in 2018 that the “Capitol Police have issued an arrest warrant, this man had threatened to kill me and chop up my family with an ax. It’s just horrendous that we have to deal with things like this. That on top of being attacked personally and having a very serious life-threatening attack on my person and then being shot at, I’ve had a year where it’s becoming more and more aware of we have these real threats out there.”

And now here he is getting a white powder threat from another unknown source. Paul is an American hero that deserves to be treated with respect. But just like the Founding Fathers, there will be those that must stand for what is right even when it is unpopular to do so.