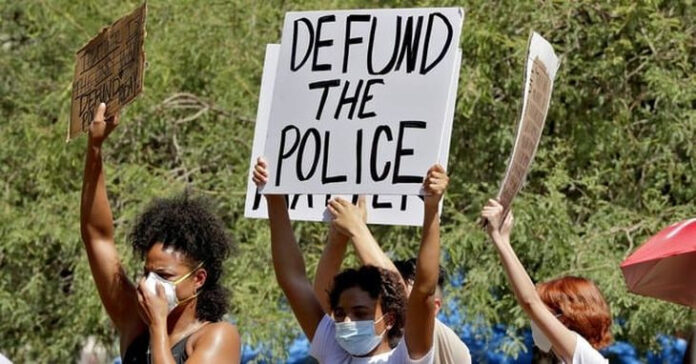 New York and Florida have become the most interesting states in the country from a political standpoint. However, Texas seems bound and determined to throw their hat into the ring. They are a state that wants to stand alone from the pack and not get swept up in all of the fake-progressive nonsense.

Governor Greg Abbott is sending a clear message to anyone who thinks that his state is going to be going along with the calls to defund the police. He is drawing that line in the sane right now and there is nothing that can be done about it. We are sure that the far left is not going to be pleased but who cares what they think?

These are the same people who are all about making fun of the police and acting like it is hilarious when bad things happen to them. They don’t have the ability to explain any of their opinions in a cogent way, so they resort to extremist takes like “let’s strip the police of all their funding”. If they are really getting ridiculous, they will claim that they want the police abolished entirely.

It’s not a realistic point of view but no one ever said that the left was going to win any awards for their critical thinking skills. Abbott is having none of it and he is maintaining the status quo at all levels. He is not about to let his state turn into some silly bastion of progressive BS. He is pledging to sign a very important act as well: the Back the Blue Act.

Austin is incapable of timely responding to a victim shot in the head.

We’re about to pass a law-that I will sign-that will prevent cities from defunding police.

Any proposed reductions in police salaries or funding would have to wait until after an election. The Washington Post has more about this very important announcement from Governor Abbott:

“Texas Gov. Greg Abbott vowed Monday to sign a bill that will thwart efforts by cities to reduce or reallocate police budgets, the latest of a string of actions he has taken to restrain local authorities. …

On Monday, Abbott reiterated his promise to sign the bill that requires a municipality or county to hold an election before a local government can make any reduction or reallocation of law enforcement funds as a percentage of its total budget, reducing the number of officer positions or the budget for recruitment and training of new officers.

The bill, known as the “Back the Blue Act,” also states that if the Texas comptroller’s office determines that a local government cut funding without an election, the municipality could not raise property taxes for the next fiscal year. It was passed by the state’s Republican-controlled Senate but was postponed by the House on Monday.

“We always #BacktheBlue. Which is why I made legislation preventing cities from defunding the police an emergency item this session,” Abbott wrote on Twitter.” This isn’t all that he had to say about the current state of affairs. Abbott was particularly incensed about a head shot victim who had to wait 16 minutes before the police showed up.

“This is what defunding the police looks like. Austin is incapable of timely responding to a victim shot in the head. Texas won’t tolerate this. We’re about to pass a law-that I will sign-that will prevent cities from defunding police. Sanity & safety will return,” he tweeted. If that response time sounds awful to you, trust us on this one, it is. This would be a bad response time for a crime that was not even this serious.

For something like a gunshot wound to the head? That’s absolutely atrocious. Cities like Austin are cutting hundreds of millions out of their police budgets and they thought that nothing would come of this choice. This is ludicrous thinking and anyone who thinks that this ends well is fooling themselves. It might be too late for Abbott to help them because they have made their own bed but he can still help others!