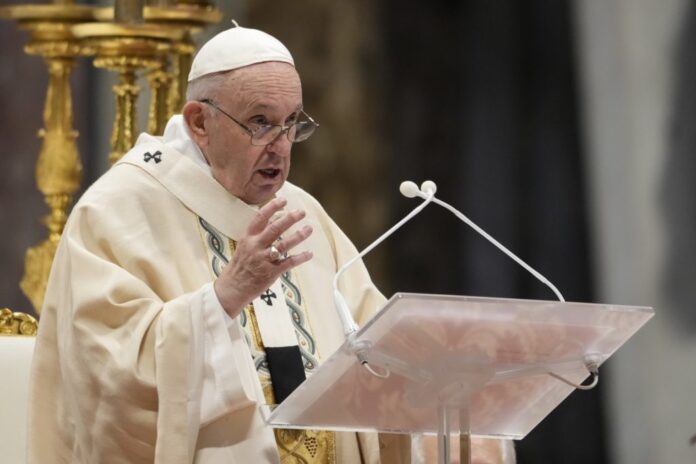 “I believe that at this point the Law 194 is a pillar of our social life,” the archbishop stated. “In my opinion, and I have written as much, I would like to see more emphasis on the part that is hardly spoken of, namely the right to motherhood, to see our country grow, in the face of the drama of a generational imbalance that is quite dramatic.”

“I would exhort to look with trust upon a country that wishes to live in liberty, in development and progress, and I think that the crisis in natality is a problem on which we have unfortunately not reflected and it is already late,” he said.

Monsignor Vincenzo Paglia, President of Pontifical Academy for Life, during the prayer organized by Community of Sant’Egidio in the basilica of Santa Maria in Trastevere. (Matteo Nardone/Pacific Press/LightRocket via Getty Images)

At this point, Giorgia Rombol?, the host of the program, summed up the archbishop’s words, saying, “So, the Law 194 is not up for debate,” to which he replied, “No, absolutely not.”

In response to Paglia’s words, Jacopo Coghe, spokesman for the pro-life NGO “Pro Vita & Famiglia” declared that even a thoughtful attempt to promote an open, non-confessional debate about abortion and the birthrate, emphasizing the importance of maternity, can deny “the intrinsic evil of the Law 194.”

“We do not understand how a law that suppresses defenseless and innocent human lives can be a ‘pillar’ of society,” Coghe added.

A protester of the feminist movement gathers for “Not One Less” in Campidoglio, against the anti-abortion motion, which must be voted from town Council of Rome on October 25, 2018 in Rome, Italy. (Simona Granati – Corbis/Getty Images)

“It is as if the president of the Jewish Anti-Defamation League declared itself in favor of the holocaust,” wrote Tommaso Scandroglio, in a piece for La Nuova Bussola Quotidiana.

Since its passage in 1978, the Law 194 has allowed for the legal killing of more than 6 million children in Italy, a country that is suffering from a severe drop in birthrate far below replacement levels.

Archbishop Paglia’s words were spoken against the backdrop of the June 24 ruling by the United States Supreme Court overturning the 1973 decision in Roe v. Wade that mandated legal abortion for all 50 U.S. states.

In 2016, Pope Francis named Paglia President of the Pontifical Academy for Life, which was founded by Saint John Paul II in 1994 for the express purpose of combatting a growing “culture of death” in contemporary society.

Central to the culture of death, according to John Paul, is the promotion of a putative right to abortion, which Italy’s Law 194 does.

“To claim the right to abortion…,” John Paul wrote, “and to recognize that right in law, means to attribute to human freedom a perverse and evil significance: that of an absolute power over others and against others. This is the death of true freedom.”