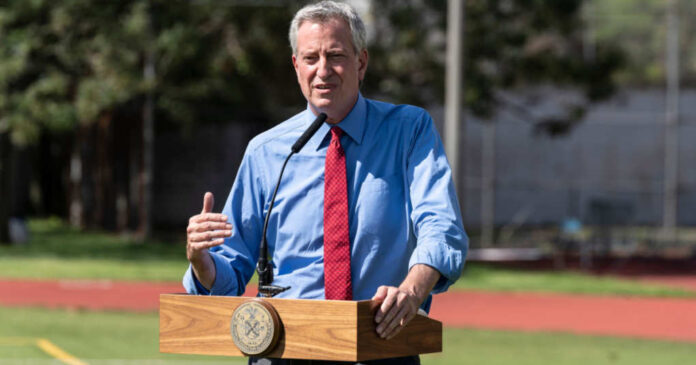 All it takes is one bad teacher and you can find yourself on the losing end of a college degree.

You wouldn’t want Bill Clinton to provide you with a course on sexual harassment or ethics. Not after what happened with Monica Lewinsky.

You wouldn’t want Benedict Arnold teaching you about American history. After all, he’s synonymous with the word “traitor.”

And Bill de Blasio, the former mayor of New York City, probably shouldn’t be teaching about government and public health.

Yet, Bill de Blasio will be headed to Harvard in the fall to do exactly that.

For seven years, de Blasio was the mayor of NYC. He is one of the reasons why the city has the amount of crime and homelessness that it does. He tried to defund the NYPD. And we all know that he didn’t manage the COVID pandemic in the way that was necessary.

Harvard is supposed to be known for its carefully curated professors – and choosing a former mayor who went against the democracy is not what an Ivy League professor should look like.

Serving as a teaching fellow, the former mayor will be at the Institute of Politics at the Harvard Kennedy School, where he’ll be responsible for teaching classes on public service and leadership.

Harvard has added former acting mayor of Boston, Kim Janey, to their teaching roster, too.

In a recent announcement by Dean Michelle A. Williams, she said they are “thrilled” to welcome the mayors. “Their insights and their mentorship will be tremendously helpful to students who aspire to public office, as well as to those who are looking to lead in other sectors.

It sounds like students should be sitting in the class with the notion to do as they say, not as they do. Any advice that de Blasio dispenses will not yield good results unless he’s using the “I did this and it didn’t work” style of teaching.

Otherwise, by the time the semester is over, we’ll have entire graduating classes knowing how to destroy a city with progressive agendas – and who all believe that defunding the police department to eliminate racism is better than providing some kind of deterrent to eliminate crime.

Right now, New York City is running rampant with violence – and all because there has been too much liberal leadership.

There are a lot of other former political leaders who have done well within the cities that they led. Yet, out of all who could have been tapped, Harvard chose Bill de Blasio.

The interim director at the Harvard Institute, Setti Warren, continues to blow past the fact that NYC was not successful under de Blasio’s leadership. Instead, she explains the choice by saying that the former mayor has “decades of experience in local government, federal agencies, national campaigns, and running the largest city in the country will provide invaluable insight to our students and the Harvard community.”

Perhaps Jimmy Fallon summed up de Blasio’s ability to lead the best when he joked by saying, “New York Mayor Bill de Blasio has been positioning himself to challenge Hillary Clinton for the Democratic nomination. Hillary once developed a program to deliver rural healthcare, while de Blasio once dropped a groundhog on its head.”

Way to go, Harvard. Perhaps someone should think about pulling this university from the Ivy ranks. It won’t be the school it used to be by the time de Blasio is done teaching there.