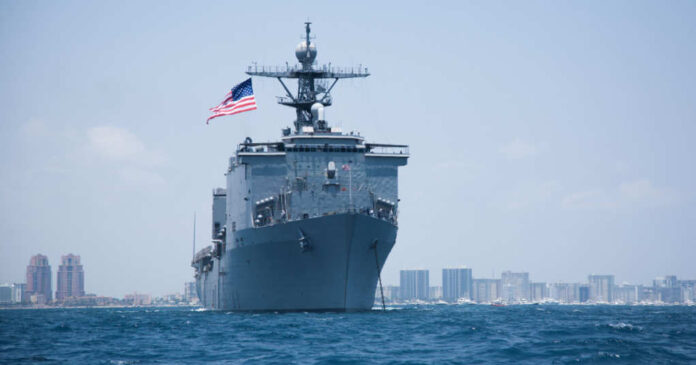 The tension between China and Taiwan is nearly palpable. And any wrong move made by the U.S. could result in war. It’s why many warned Nany Pelosi against visiting the island nation.

The Communist nation of China issued warning after warning. Pelosi should not visit Taiwan. Otherwise, they would view it as the U.S. choosing a side – and believing that Taiwan is not a part of China.

So far, a war has not been waged – and Pelosi has returned to the U.S.

Now, however, U.S. naval ships are sailing into Taiwan. And we have to wonder what China is going to do about it.

The two Navy ships entered the Taiwan Strait, and it is the first naval transit from the United States since Pelosi’s visit.

Both the USS Antietam and the USS Chancellorsville made their way through the straight. According to a statement issued by the U.S. 7th Fleet in Japan, the cruisers made their way “through waters where high seas freedoms of navigation and overflight apply in accordance with international law.”

Essentially, the ships have to go through this territory. And as of yet, there has been no interference from foreign military forces.

The ships are traveling in an area where there is no real territory. And the United States is not doing anything wrong by sending its naval fleet through the Strait. As the statement goes on to say, “The United States military flies, sails, and operates anywhere international law allows.”

If China were to take issue with what’s going on in the Taiwan Strait, they would be going against international law – and the U.S. wouldn’t be the only one to experience China’s wrath since many countries use the strait as a means of getting to various destinations.

Of course, the U.S. sending its ships through this channel so soon after Pelosi’s visit is also sending a very clear message to China. The U.S. military will not be intimidated. It will follow international law and go where it wants to go, whether that’s to Taiwan, Japan, or anywhere else in Asia.

Knowing how easily China loves to launch missiles and claim that they were scheduled exercises, there’s no telling what they could have viewed as a “provocation.” Had the ships even veered too close to the Taiwanese coast, China could have deemed that the U.S. was provoking them.

Luckily, the Chinese military kept to themselves.

Still, there seems to be confusion as to who the Taiwan Strait belongs to. The U.S. identifies that the majority of it is international waters. Meanwhile, Beijing wants to claim not only sovereignty over the island of Taiwan but also the strait, claiming it is “internal waters.”

Beijing can make all of the claims that they want. However, they are in the wrong – and they likely know it, which is why the Eastern Theater Command simply sat back and watched the naval ships pass.

Colonel Shi Yi, the spokesman of the Eastern Theater Command for the People’s Liberation Army doesn’t believe that the international law applies. Instead, they want to make the U.S. into warmongers, saying, “The frequent provocations and showing-off by the US fully demonstrate that the US is the destroyer of peace and stability in the Taiwan Strait and the creator of security risks in the Taiwan Strait.”

They have clearly allowed two ships to go through, but how many more will they allow before they see it as being provoked? Only time will tell.