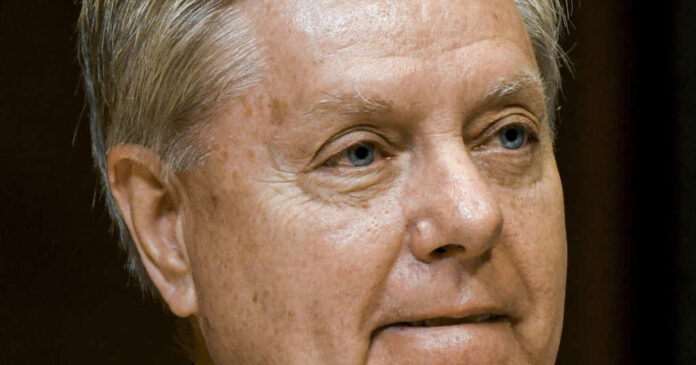 Mary McCord is a former top official at the Department of Justice. She recently lashed out at Sen. Lindsey Graham (R-S.C.) for comments he made that warned of coming “riots in the streets” if former President Trump is prosecuted.

The possibility of prosecution with Trump is coming from his potential mishandling of materials found when the FBI made an early morning seizure from his Mar-a-Lago home in Florida.

“I think it’s incredibly irresponsible for an elected official to basically make veiled threats of violence, just if law enforcement and the Department of Justice and a grand jury does their job,” McCord said on CNN’s “New Day.”

McCord was the acting assistant attorney general for national security at the Department of Justice. Now she is the executive director of the Institute for Constitutional Advocacy and Protection. She maintained that Graham’s comments were similar to what former President Donald Trump would do. She described his “game plan” that indirectly encouraged supporters toward violence.

“‘People are angry, they may be violent,’ and then what [Trump] knows and what Lindsey Graham also knows … is that people listen to that and people actually mobilize and do things. Jan. 6 was the result of this same kind of tactic by President Trump and his allies,” McCord said.

The January 6, 2021 riot at the U.S. Capitol is still being investigated by the Justice Department and the House select committee. They are also focused on a broad investigation of possible interference with the 2020 presidential election.

And a special grand jury in the state of Georgia is investigating an effort by former President Trump and his allies to overturn the 2020 election results in the state. Right now Graham is fighting a subpoena to appear in that case.

All of these, along with the classified documents seized at Mar-a-Lago, have the potential to end in a prosecution against the former president.

While Graham was being interviewed on Fox News’s “Sunday Night in America,” he said that Trump was being treated with “a double standard” compared to former Secretary of State Hillary Clinton and her private email server. It’s because of this disparity that Graham warned of riots in the streets if Trump is prosecuted for simply mishandling classified information.

A warrant in this case that was recently unsealed, revealed that Trump was also under investigation for possible violations of the Espionage Act and other laws about the documents and classified materials.

People like McCord believe that Graham’s take on the potential violence was not just a prediction but a threat.

“It’s irresponsible, it’s dangerous. It’s a threat to our democracy, and I think he should be ashamed of himself,” McCord said of Graham.

“He will use that as a hedge against criminal charges & will incite violence when charges come. Looks like @LindseyGrahamSC will be his mouthpiece and deliver the message,” Guttenberg said on Twitter.

Former President Trump immediately shared the remarks that Graham made with Fox News on his social media platform.

The Justice Department is certainly aware of the polarization in the country and how politically sensitive what they are doing is. Since this is true, that is all the more reason a special master should be appointed to lead the review of material in this investigation.

The DOJ is at risk of damaging its reputation of being independent of politics if that is not already lost. The stakes continue to be raised and every move is being monitored.

Are we beyond any hope for real justice?